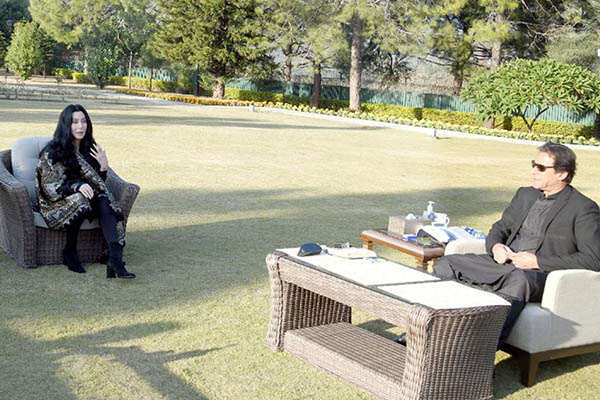 In a socially distanced meeting, the singer agreed to help in whatever capacity she could, and appreciated the prime minister’s key initiatives to achieve a cleaner and greener Pakistan.

“She said that both the Protected Areas Initiative and the 10 Billion Tree Tsunami initiative of the government were highly commendable and praiseworthy as nature-based tools for climate mitigation,” a statement issued by the Prime Minister’s Office claimed. It said that Cher had also offered her support to further the country’s ecological initiatives through her organization Free the Wild, and thanked Khan for his support in helping free Kaavan.

Cher is currently in the federal capital to help escort Kaavan to a sanctuary in Cambodia. The 36-year-old elephant has spent most of his life in a small enclosure at the Islamabad Zoo—the last eight of those spent in solitude following the death of his companion elephant. She helped spearhead a global campaign to secure Kaavan’s release from the zoo and transfer to a sanctuary. A documentary on Kaavan’s journey to freedom is set for release next year.

“Just came from meeting to thank Prime Minister Imran Kahn for making it possible for me to take Kaavan to Cambodia,” Cher posted on Twitter after the meeting. “Kaavan will be able to leave for Cambodia on [Nov.] 29. Think documentary will be heartwarming,” she added.

During their meeting, P.M. Khan appreciated Cher’s efforts in retiring Kaavan to an elephant sanctuary and thanked her for her tireless campaign. According to the Prime Minister’s Office, he “observed that it was indeed a happy moment for all of us that after giving joy and happiness to the people of Islamabad and Pakistan for about 35 years, Kaavan will now be able to retire with other elephants in a specialized sanctuary in Cambodia.”

Special Assistant to the P.M. on Climate Change Malik Amin Aslam—who is leading the country’s “Clean and Green” initiative—also attended the meeting between Cher and the prime minister.