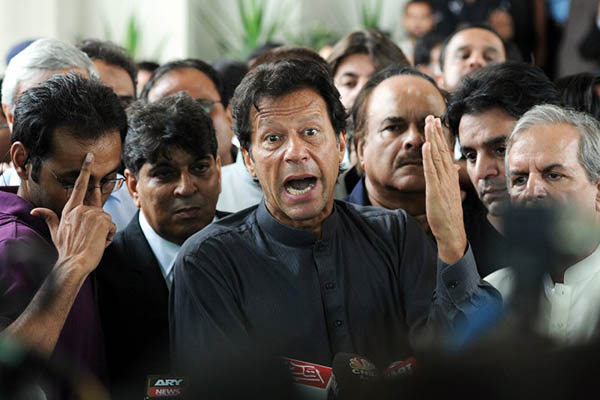 PTI chief alleges that prominent journalist is being appointed as PCB chairman to reward him for rigging last year’s general elections.

Former cricketer-turned-politician Imran Khan on Tuesday lashed out at the country’s newly reappointed cricket chief, alleging he was being rewarded for helping the ruling party commit fraud in last year’s general elections.

Najam Sethi, a prominent journalist who was appointed interim chief minister of the Punjab province during last year’s election campaign, was reinstated as Pakistan Cricket Board (PCB) chairman on Monday by Prime Minister Nawaz Sharif. His predecessor Zaka Ashraf was removed on charges of not running the board properly.

But Khan said that Sethi was being rewarded for helping to rig the result of the May elections, in which his Pakistan Tehreek-e-Insaf (PTI) party won 35 of the 272 seats in Parliament. The PTI has launched legal challenges concerning the result in hundreds of constituencies at the national and provincial levels.

“When the election tribunal rules on them we will know … who fixed the puncture and who was rewarded with the gift of the PCB chairmanship,” Khan told reporters. “Fixing the punctures” refers to election rigging allegations.

Sethi denied the allegations. “Whoever has been accusing me (of rigging in elections) … I will take legal actions against them,” Sethi told reporters.

Khan also questioned whether Sethi, who is best known as the editor of the liberal Friday Times weekly newspaper, had enough cricketing knowledge for the post.

Sethi’s reinstatement was the latest twist in a long running legal saga that saw Ashraf brought back as chief on Jan. 15 by the Islamabad High Court, eight months after he was originally removed over dubious elections in the PCB. Sethi was appointed the caretaker chairman in the interim period.

Well, you could have found a better picture of Imran Khan for the main image of your story, couldn’t you? Pakistani media is seeing its lowest lows these days…