Imran Khan Lashes Out at U.S. As Protests Continue 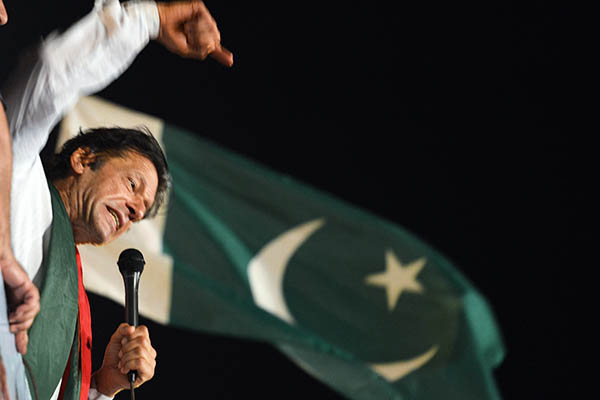 Cricketer-turned-politician Imran Khan on Thursday lashed out at a U.S. State Department press briefing that identified Nawaz Sharif as the constitutionally elected prime minister of Pakistan.

In a daily press briefing on Aug. 20, U.S. State Department deputy spokeswoman Marie Harf said: “We support the constitutional and electoral process in Pakistan, which produced the Prime Minister of Nawaz Sharif.” She also said: “He’s the prime minister, period.”

Claiming the U.S. statement was expressing support for Prime Minister Nawaz Sharif and his regime, Khan demanded Washington stop “meddling” in Pakistan’s internal affairs. “I would like to put a very simple question before U.S. Ambassador Mr. Richard Olson,” thundered Khan. “If rigged elections were held in his country, would he call them legal?” Khan claimed no western country would permit a fraudulent election to stand. “Are we Pakistanis children of a lesser God?” he asked.

Khan said the U.S. should retract its statement and stop supporting its “stooge” Nawaz Sharif. “We are willing to be friends with you but Imran Khan as prime minister will never be your stooge,” he said. The PTI chief also claimed he would not end his protest until Nawaz Sharif tendered his resignation. “As long as I’m alive, I will not leave this place until you resign Nawaz Sharif,” he said. “Even if I have to sit here for a year.”

The PTI leader also implied that a third “force” would ensure the standoff between him and the government would soon end. “Just wait two more days. I am sure that by Saturday night, the umpire will raise a finger [and declare victory for Khan],” he said.

Meanwhile, Prime Minister Nawaz Sharif denied Khan’s rhetoric and said the government had no intention of using police force against the protesters assembled outside Parliament House. Talking to senior journalists at his office, he said that if he were to resign at the behest of a “few thousand” people, the country would fall into crisis, which the government could not allow. “Eleven out of 12 political parties are backing our government in Parliament, which clearly shows our government is enjoying the endorsement of the majority in the National Assembly,” the premier said, according to Special Assistant for National Affairs to Prime Minister Irfan Siddiqui, who was also present during the meeting.

“Any unconstitutional steps can harm the country and, being the prime minister, I have directed all political forces to play their role [in ending this situation],” Siddiqui quoted the P.M. as saying. “Our government is ready to launch talks with the commitment that we will defuse the crisis through dialogue,” he added.

Jamaat-e-Islami chief Siraj-ul-Haq, who had led failed efforts to negotiate a truce between the government and PTI and PAT, has suggested that the demand for the prime minister’s resignation should be linked to the results of a judicial inquiry into the rigging allegations of the 2013 polls. “I have conveyed this idea to Imran Khan and Tahir-ul-Qadri with a request to consider it on priority basis so the nation can come out of this situation,” he told Newsweek.

The Opposition Leader in the National Assembly, Khursheed Shah, has supported Haq’s suggestion. The Pakistan Peoples Party leader urged Khan on Thursday to make the prime minister’s resignation the final demand of his six-point agenda, to be implemented after rigging has been established by a judicial inquiry.