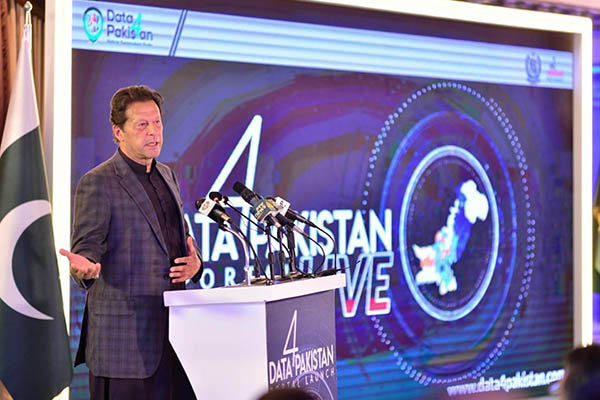 Launching the Ehsaas District Development Portal, Data4Pakistan, on Tuesday, Prime Minister Imran Khan said the initiative was part of the government’s commitment to reduce poverty in Pakistan, as progress and prosperity were directly linked to uplifting the impoverished.

“It is my belief that a country where there is an ocean of poor people and few rich cannot make progress,” he said, adding the Data4Pakistan portal would help the government distribute development funds per people’s needs. Khan said the portal would help identify the areas that were in most need of funds, while also providing vital statistics about issues being faced by the people.

Data4Pakistan would also help in higher-level policymaking as well as budget allocation, he said, adding that the earmarking of the budget would be on a need and merit basis without any political considerations.

Earlier, addressing the launch ceremony, Special Assistant to the P.M. on Poverty Alleviation and Social Protection Sania Nishtar said the Data4Pakistan portal was developed in collaboration with the World Bank and would prove a valuable resource for federal, provincial and district level policymakers.

She said Data4Pakistan was the first initiative of its kind in the country, and would provide open and public access to a spatial interactive portal that has poverty estimates for every district in Pakistan, along with over 120 development and policy indicators.

The portal currently has six rounds of district-level poverty and development data, covering the period between 2004 and 2018. It includes interactive maps that allow the user to visualize and compare districts on poverty and two additional indicators, including but not limited to water and sanitation and housing characteristics.

The interactive portal also allows for detailed information on individual districts, with pop-ups, and users can focus in on subsets of provinces or districts using a simple drop-down list. Custom maps with data chosen by the user can also be downloaded and printed.

According to Nishtar, the portal uses data provided by the Pakistan Bureau of Statistics, as part of its Pakistan Social and Living Standards Measurement Surveys as well as the Multiple Indicators Cluster Surveys produced by the provincial Bureaus of Statistics.

The indicators currently available in the portal include a range of demographic, health, education and employment statistics as well as statistics on access to key services such as water, sanitation, electricity and gas. It also provides a number of gender parity indices at the district level.

An additional resources section on the website provides information on the indicators included in the portal and other background material and reports. New material as well as new data and indicators would be added frequently, said the Special Assistant to the P.M.

Nishtar said the Ehsaas program was dedicated to fostering the creation of a welfare state by countering elite needs and leveraging data and technology to create precision safety nets and poverty alleviation solutions. The launch of Data4Pakistan was another important step to foster evidence-based decision-making, she added.

At present we do not have Care services available for our elderly. Specially for those Pakistanis who are living abroad, and would like to see their parents, and relation who are getting old to get elderly a very good quality care, nursing care etc.
( people suffering from Strokes, Demntia, etc.)

It would be a good source of foreign currency for Pakistan, if such care homes are allowed to operate in Pakistan,

However, the govt must set up a Care Quality Commission, to ensure that all the Care homes have minimum standard of health,safety, cleanliness and well being of the residents. at heart of the organisation .etc etc.