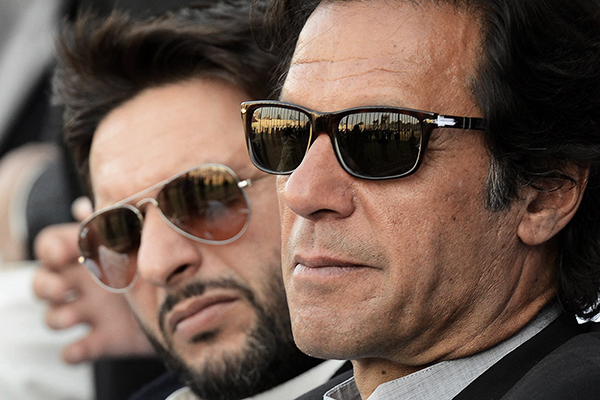 Khan and Afridi in Peshawar, Jan. 25. A. Majeed—AFP

Imran Khan, former cricketer and now leader of the governing party in Khyber-Pakhtunkhwa province, launched a scheme on Saturday to scout for cricket talent as part of his Pakistan Tehreek-e-Insaf’s antiterrorism efforts.

Khan, who led Pakistan to World Cup glory in 1992, said he hoped finding new talent would help Pakistan win the title once more. “This is the start to a campaign to unearth talent in [Khyber-Pakhtunkhwa] who will in turn bring another World Cup to Pakistan,” said Khan.

The PTI faces the challenge of bringing peace to the country’s worst-hit province, with Khan a vocal advocate of holding “peace” talks with the Taliban. “I hope and pray that peace is restored in every part, including the [federally-administered tribal areas], where a lot of cricket talent needs to be unearthed,” he said.

Khan said he was himself unearthed by a talent-hunt scheme. “Forty years ago I went to Lahore University grounds and was selected as a 16-year-old boy,” he said. “When I launched the first scheme in Karachi 20 years ago we unearthed Shahid Afridi,” he added, describing the all-rounder who still plays limited-overs cricket for Pakistan.

Afridi, also present at the launch, said young Pakistani talent was needed to supplement people like Khan both in cricket and politics as well as to divert young people away from extremism. “It’s a healthy activity and will help divert the youth to constructive activities, so I request the youth to support Khan, both in cricket and politics,” said Afridi.

Under the scouting scheme, eight teams will be selected throughout the province and selected players will be recommended to Pakistan’s national selectors.