Imran Khan Once Again Calls on ‘Neutrals’ to Review Policies 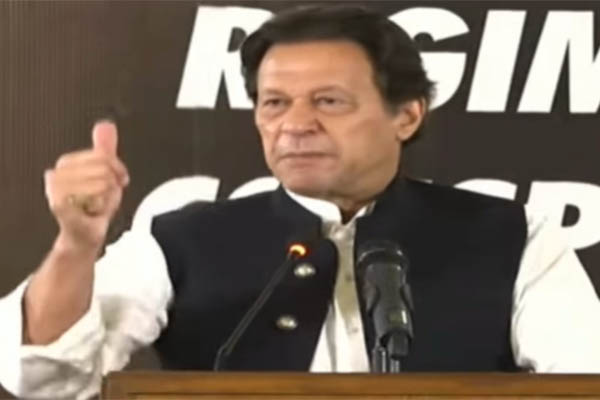 Pakistan Tehreek-e-Insaf (PTI) Chairman Imran Khan on Thursday once again took “neutrals”—his euphemism for the country’s security establishment—to task over their alleged role in “imposing” the incumbent government on the country, urging them to “review” their policies.

Addressing a seminar organized by his party, ostensibly in support of freedom of expression, the ousted prime minister said the establishment still had time to reverse its decision to support the incumbent government. Accusing the military leadership of imposing “thieves” on Pakistan, he questioned how the establishment had “allowed” the incumbent government to rule the country after they came into power through a “foreign conspiracy.”

Khan’s “foreign conspiracy” claims have been repeatedly denied by both the government and the military establishment, with a meeting of the National Security Council twice clarifying that there was no evidence of any “conspiracy,” merely attempted “interference” in Pakistan’s internal affairs. Stressing that the establishment had the “most power,” he said this authority came with responsibilities.

“No matter how much you [military establishment] call yourself neutral, the nation will blame you for imposing this government on us,” he said, alleging that the military leadership was “spreading fear” to “force” the public to accept “thieves” in power. “They are calling our MNAs and pressuring us to accept this government,” he claimed, without naming any names.

The PTI chairman claimed his party’s social media activists had also been detained and “forced” to say they had tweeted against the military on his directions. “Whoever tweets against the Army is picked up,” he said, apparently accepting that his party’s activists have been posting anti-Army content on social media despite earlier claiming that his party had no role in such a campaign.

Referring to his chief of staff, Shahbaz Gill, who is currently facing a sedition case for allegedly seeking to incite mutiny within the armed forces, Khan described his remarks as “inappropriate.” However, he said, the trail should be allowed to proceed and Gill should not be “tortured.” Reiterating his claims of opposition leaders having also spoken against the Army, he questioned why they had also not been placed under arrest and tried.

The ousted prime minister also reiterated his stance of transparent elections being the only way to stabilize the political situation in the country, adding that freedom of expression was an essential part of a liberated society and no nation could prosper without it. Khan, who has repeatedly refused to give interviews to critical journalists or even stage press conferences, said he was not afraid of freedom of expression.

Khan also repeated his criticisms of the incumbent coalition government comprising parties that had earlier lodged corruption cases against each other. He did not make any mention of his party electing PMLQ’s Pervaiz Elahi as chief minister of Punjab despite him earlier describing him as the “biggest dacoit” of the province.

Claiming, without identifying the persons involved in this intelligence sharing, that the ISI had told him in 1996 that Nawaz Sharif and Asif Ali Zardari had moved Rs. 1.5 billion out of the country, he said they were facing “open and shut” cases. “I initially supported former president Pervez Musharraf because he came to end corruption. However, he later gave an NRO to these people,” he said.

In a posting on Twitter, Prime Minister Shehbaz Sharif slammed Khan’s speech on media freedom. “This is what self-righteousness does to you: you consider yourself holy and above reproach despite flawed conduct in office,” he wrote. “You confuse people by distorting facts. You play mind games and insult their intelligence through deceitful ways. [Imran Khan] Niazi’s speech today was nothing but this,” he added.

Earlier, Information Minister Marriyum Aurangzeb similarly told a press conference that Khan calling for media freedom was nothing less than a joke. Recalling that several journalists were tortured and news shows banned from broadcast during the PTI’s tenure, she said the ousted prime minister was “misleading” the nation. “Several international media organizations had called Khan a ‘predator’ and black laws against media were formed under his tenure,” she said, and accused his media team of spreading propaganda against journalists in Pakistan.

Describing some of the attacks on journalists during the PTI’s tenure, she said Khan had been the prime minister when Absar Alam, Asad Toor, Asma Sherazi, Gharida Farooqui, Nusrat Javed, and Matiullah Jan were attacked. Similarly, she said, during the PTI’s tenure programs of renowned journalists Amber Shamsi, Hamid Mir, Talat Hussain, Iftikhar Ahmed, Najam Sethi, and Murtaza Solangi were also suspended.

Discussing Shahbaz Gill’s arrest, she said it was curious the PTI was raising such hue and cry over a legal detention when it had celebrated the arrests of opposition politicians during its term in power. “Nawaz Sharif was handcuffed in front of his daughter Maryam Nawaz, and cases were registered against 90-year-old mother of Javed Latif,” she said, and accused Gill of “faking” his illness to avoid police interrogation.

Referring to Khan’s repeated attacks on Pakistan’s “flawed” justice system, Aurangzeb questioned why the PTI chairman repeatedly refused to appear before any authority to justify his alleged crimes. “Khan is not appearing before the Federal Investigation Agency and should be arrested,” she added.