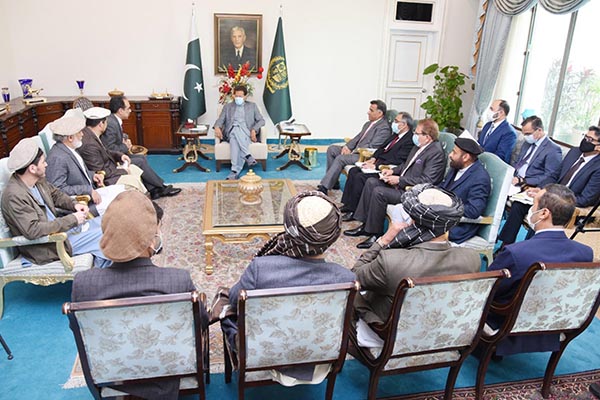 There is no military solution to the Afghanistan conflict, Prime Minister Imran Khan said on Thursday, adding that a negotiated political settlement was the “only way forward.”

During a meeting in Islamabad with Ahmad Wali Massoud, the head of the Massoud Foundation, he stressed that Pakistan had been deeply affected by the situation in the neighboring state, and that—after Afghanistan—Pakistan was the most eager to see peace restored in the war-torn country.

The prime minister emphasized that peace in Afghanistan would have lasting benefits for not only the region, but also the globe, as it would deliver economic development, regional trade, and improved connectivity. He apprised the visiting delegation that Pakistan had extended its full support for the facilitation of the U.S.-Taliban Peace Agreement and intra-Afghan negotiations. He claimed the intra-Afghan negotiations provided an historic opportunity for an inclusive, broad-based and comprehensive political settlement that must be seized by the Afghan leadership.

Khan said Pakistan has been encouraging all sides to work together constructively, reduce violence to achieve ceasefire, and secure a political solution for a peaceful, stable and prosperous Afghanistan. He said Islamabad and Kabul were strengthening their ties through a liberal visa regime, and increased facilitation in bilateral and transit trade. Pakistan’s assistance for Afghanistan’s development efforts and human resource capacity-building would also continue, he added.

Welcoming Massoud to Pakistan, the prime minister emphasized that the neighboring nations are bound by a fraternal relationship rooted in shared history and commonalities of faith, culture and traditions. He also recalled the historic contribution Massoud’s father, the late Ahmed Shah Massoud, who was a key mujahideen leader during the Afghan resistance movement.

According to Pakistan’s Foreign Office, Ahmad Wali Massoud’s visit is a continuation of Pakistan’s policy of reaching out to Afghan leaders to further strengthen bilateral ties, and enhance mutual convergence on the Afghan peace process.