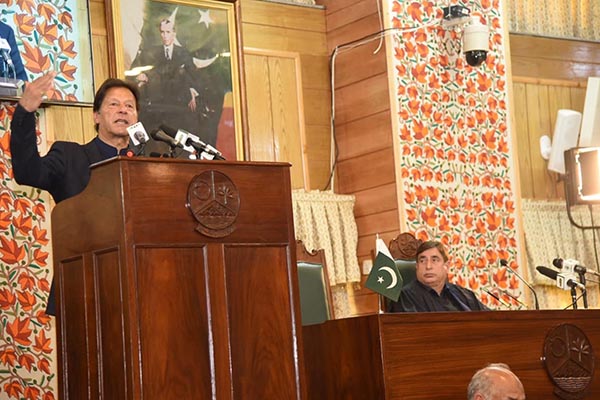 Pakistan Prime Minister Imran Khan on Wednesday rejected a call for national reconciliation in the country, saying he could not work with anyone who has indulged in corruption.

Khan was responding to a plea by Azad Jammu and Kashmir Prime Minister Raja Farooq Haider in which the Kashmiri leader had pleaded with him to reconcile with opposition forces in the larger interest of the country. “As a Kashmiri, I want to make a request to you: Begin national reconciliation in Pakistan. Raise yourself above everyone else and take everyone along,” said Haider during a special session of the AJK Legislative Assembly marking Kashmir Solidarity Day.

“We all are with you. Being the prime minister of the country you are respectable for us and we have some expectations from you. Please end these fights on TV talk shows, which have really divided the country,” he said, adding Pakistan could only prosper if there were “national unity and consensus of opinion.”

In his response, Khan vehemently opposed the call for reconciliation while maintaining that he did not have a personal enmity with anyone. “I am a democrat,” he said, adding democracy as a concept was rooted in meritocracy.

The prime minister alleged that every government entity had been corrupted by previous rulers, and vowed that no one who had looted the national exchequer could ever be spared. “It’s a fight against corruption. Take the example of China, which sent about 450 minister-level people to jail whereas in the U.S. and Europe, corruption-tainted people are put behind bars even after lapse of so many years,” he added.

“Please don’t ask me to reconcile with the corrupt people who stashed the wealth of this country in foreign countries,” Khan said. He directed those in attendance to observe the difference between prosperous and impoverished nations, claiming countries with better democratic dispensations witnessed greater development, while those without “clean and transparent” governments often lagged behind.

Reiterating that he had no personal enmity with anyone, Khan said his key issue was with anyone who had personally benefited at the cost of Pakistan’s progress. “If someone commits theft in my house and burdens me with debt, should I make friends with them,” he asked.