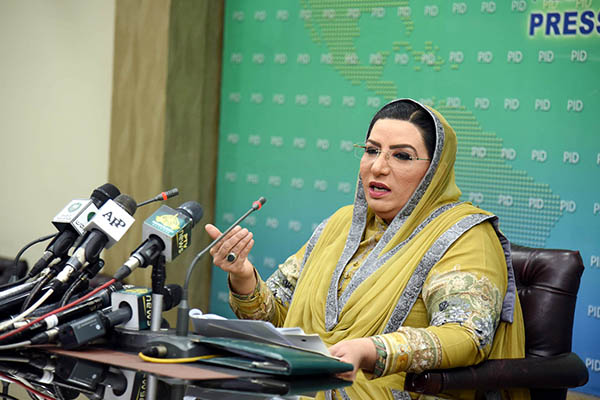 Prime Minister Imran Khan on Tuesday rejected a proposal of the Punjab government to import dengue vaccines from neighboring India, citing the ‘inhuman’ policies of the Narendra Modi-led government for his decision.

Addressing media after the weekly meeting of the federal cabinet, Special Assistant to the P.M. on Information Firdous Ashiq Awan said the prime minister had urged the provincial government to seek alternative options for the medicine and avoid any business with New Delhi over its anti-Muslim policies.

Meanwhile, said Awan, the cabinet approved a request to grant ‘inquiry commission’ powers to a committee formed to probe the recent wheat flour and sugar shortages in the country. “The committee, which is due to present its report on the shortage of two commodities before the cabinet next week, has been given powers of inquiry commission under the Commission of Inquiry Act 2017, ” said the special assistant to the P.M.

She said the Federal Investigation Agency’s director general had sought some time from the cabinet to submit his final report, adding that the majority of the cabinet supported making the report public at the earliest. Granting the committee the status of an inquiry commission would give legal cover for it to visit relevant departments during the investigation and conduct forensic audits of their accounts, said Awan, noting that such audits were deemed necessary to “expose” the people behind the sugar crisis.

The prime minister, said the de facto information minister, had directed the committee to step up its efforts and quickly conclude the fact-finding process so that the culprits could be taken to the task. The committee has also been given the mandate to evaluate the role of the Competition Commission of Pakistan during the shortage, said Awan.

“The committee will investigate why the commission which ought to expose, punish and eliminate the cartels and mafias, has been playing the role of a silent spectator,” she said.

The cabinet meeting, per the special assistant to the P.M. on information, also discussed the disparity in pay scales of government employees working with the federal and provincial governments. The prime minister directed the formulation of a uniform policy to avoid discrimination, she added.

Awan told the press briefing that the cabinet had decided to upgrade the existing systems by which utility bills were issued to customers, adding plans were underway to disburse bills through mobile phone apps and e-mail to ensure timely delivery. She said the cabinet also wanted to replace all branded medicines at hospitals with generic ones.

As is routine with the incumbent government, now in its 19th month in power, Awan took great pains to blame the previous government for the country’s energy crisis, claiming costly agreements had resulted in high power tariffs. She said the prime minister had announced the next cabinet meeting would “expose” the agreements signed by Shahid Khaqan Abbasi during his time as petroleum minister.

The special assistant to the P.M. said Adviser to the P.M. on Institutional Reforms and Austerity Ishrat Husain had presented the cabinet with a report on restructuring of federal government institutions. He proposed complete privatization of 16 institutions and transfer of over 30 to the Pakistan Sarmaya Company, she added.

Referring to the ongoing spread of coronavirus in Pakistan and the world, Awan said the cabinet had been briefed on the students stranded in China due to the pandemic. She said the cabinet had imposed a ban on the export of personal protective equipment, including special dress, gowns, gloves and surgical masks to avoid any shortage in the market. To a question, she said coronavirus was a problem for the entire nation. All the provinces would be provided full assistance for overcoming the epidemic, she added.

The special assistant said the cabinet had decided that pensioners’ proof of life would be linked with biometric system, which would help widows as they would only need to submit certificates of remarriage once a year. The cabinet also approved the resignation of Board of Investment Chairman Zubair Gilani, who quit due to personal reasons, she added.