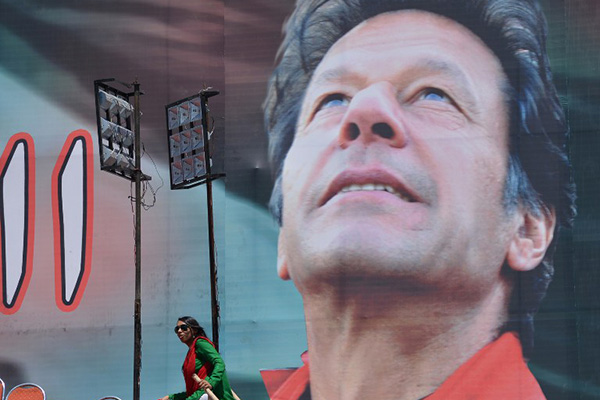 PTI chief will spend three days recuperating at his Lahore residence before moving to Islamabad.

Pakistani politician Imran Khan left hospital on Wednesday, two weeks after breaking bones in his back in a fall at a rally for the country’s general elections, where his party scored a major breakthrough.

The 60-year-old was ordered to remain immobile in bed after he fractured vertebrae and a rib in a dramatic tumble from a hoist lifting him to a stage just days before the May 11 general elections.

The former cricket star, who leads the Pakistan Tehreek-e-Insaf party, electrified much of the campaign with his calls for reform and galvanized many young people to vote, but was forced to spend polling day in hospital.

Khwaja Nazir, a spokesman for the Shaukat Khanum Memorial Hospital in Lahore, where Khan was being treated, said that the Pakistani politician had been discharged on Wednesday and returned to his home in the city. “He will stay in his Lahore home for three days and then will be shifted to his home in Islamabad,” Nazir said. “Doctors have advised him rest for two more weeks.”

On Tuesday Khan took his first steps since the injury and a video on the hospital’s Facebook page on Wednesday showed him walking gingerly but unaided from his third-floor room to the exit. He has been fitted with a specially-designed spinal brace that doctors say he will need to wear for some time.

“Imran will continue to receive regular physiotherapy and will need to wear a spinal support for some weeks to come,” the hospital spokesman said. “Imran will gradually increase physical … activity over the next few weeks with a return to his full functional capacity expected in approximately six to eight weeks.”

The election was won by the Pakistan Muslim League (Nawaz) of former prime minister Nawaz Sharif, but the PTI scored a major breakthrough, finishing in third place with 28 National Assembly seats, according to partial results. Though the “tsunami” predicted by Khan did not sweep PTI to power in Islamabad, the result represented a huge achievement for a party that had only ever won one National Assembly seat before, in 2002.

The party also emerged as the largest in the provincial assembly of Khyber-Pakhtunkhwa and will lead a coalition government in the restive province, which borders the lawless tribal districts along the Afghan frontier and suffers frequent militant violence.

On Sunday, the PTI won a repeat election in one constituency in violence-plagued Karachi. Repolling was done in 43 constituencies of NA-250 after allegations of ballot-stuffing.