In interview with U.K.’s Guardian newspaper, PTI chairman reiterates claims of security agencies being responsible for human rights abuses in his term as prime minister 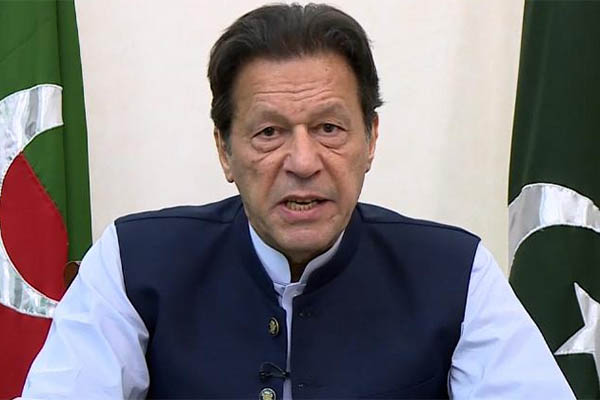 Screengrab of an interview of PTI Chairman Imran Khan with CNN

Pakistan Tehreek-e-Insaf (PTI) Chairman Imran Khan has condemned the attack on author Salman Rushdie as “terrible” and “sad,” stressing there is no way to justify the assault at an event in New York last week.

In an interview with British daily The Guardian, Khan—who has exchanged harsh words with Rushdie in the past—said that coming from a Muslim family, the author had understood Muslim sentiments about Islam’s Prophet. “So the anger I understood, but you can’t justify what happened,” he said.

In the wide-ranging interview, the ousted prime minister was also asked about his comments on Afghanistan “breaking the shackles of slavery” with the return of Taliban to power, and his claims that the ban on girls’ education was part of Afghan cultural norms. “Eventually Afghan women, the Afghan people, will assert their rights. They are strong people,” he told the British newspaper. “But if you push the Taliban from the outside, knowing their mindset, they will just put up defenses. They just hate outside interference,” he said, without elaborating on how those rights would be ensured.

On the arrest of his chief of staff Shahbaz Gill for allegedly inciting mutiny within the armed forces, Khan appeared to adopt a different tack from his statements for the domestic audience. According to Islamabad police, Gill has been arrested for inciting mutiny within the Army as well as inciting the public against state institutions. Having earlier told local media that he believed some of Gill’s remarks were “a mistake” and should be legally prosecuted, Khan told The Guardian that the PTI leader was arrested merely because he had said Army officers should not obey unlawful commands. “They are forcing him to say that I was the one who told him to say that,” he alleged.

The PTI chairman said Gill’s arrest—and the suspension of ARY News in parts of the country for broadcasting the commentary without any attempt to prevent it—was part of a “pattern” of the incumbent government. “What they’re doing to Gill is sending a message to everyone,” he said. “And they have scared our workers. Social media activists have been picked up and we have a very vibrant social media. They’re trying to sort of intimidate the people,” he told the newspaper.

Noting the poor human rights record under Khan’s tenure, The Guardian cited Reporters Without Borders as saying that while the litany of abuses under the PTI was “endless,” there had been no visible let-up in the harassment of journalists since Prime Minister Shehbaz Sharif came into power.

For his part, Khan accused the security establishment for the human rights abuses reported in his government. “They were responsible for picking up people, but according to them they were involved in this insurgency, which was going on in Balochistan and the tribal area bordering Afghanistan. So they would blame that, with some justification, because you could not convict terrorists in the courts because you wouldn’t get witnesses,” he said, adding that he had “never” tried to oppress the media. “The only problem was that sometimes the … security agencies—three or four times we found out they picked someone up and immediately when we found out we would immediately have them released,” he claimed, without making any reference to the closure of Geo News and 24 News in his tenure, or the many journalists who were removed from their jobs for speaking against the PTI.

On the PTI’s prohibited funding case, The Guardian said the former prime minister did not deny the allegations but claimed the case was “politically motivated” as his rival parties had not faced similar scrutiny. The case was filed by a founding member of the PTI and took 8 years to reach its conclusion. All the cases pending PTI’s rivals were filed by the party—and have not yet been pending for more than 4 years.

Khan, during his interview, reiterated the allegations of his government being ousted through a U.S.-led conspiracy, claims that have been repeatedly rejected by the military, Washington and the incumbent rulers. He also hinted that the military could have prevented the ouster if it so desired—virtually inviting them to interfere in the country’s political process. “If they [Army] were not behind the conspiracy, they certainly could have stopped it because the intelligence agencies, the ISI [Inter-Services Intelligence] and MI [Military Intelligence], are international-quality intelligence agencies, and they certainly would have known what was going on,” he added.