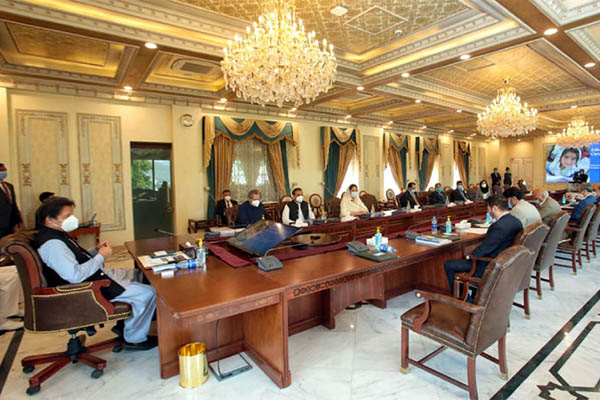 Prime Minister Imran Khan on Thursday directed officials concerned to work with provincial governments and evolve a strategy over the future of educational institutions in Pakistan during the ongoing coronavirus pandemic.

“Formulate a joint strategy in collaboration with the provincial education ministers regarding the future teaching process,” he told the meeting in Islamabad, which was briefed on the government’s ongoing efforts to introduce a uniform syllabus nationwide, as well as to assess the disruption caused to the education system by COVID-19. He advised seeking “out of the box” solutions to ensure education was not impacted by the pandemic. He also directed the officials to evolve a strategy to address financial difficulties of educational institutions and reservations of parents regarding payment of fees without any formal schooling.

Educational institutions across the country have been closed since March, with authorities saying they do not want to risk the spread of the coronavirus among students if they are allowed to reopen at this stage of the pandemic. Both federal and provincial authorities have introduced online classes in the interim, but many citizens have complained that they lack access to facilities required to avail them. The prime minister has repeatedly asserted that the only solution to the pandemic is to “learn to live with it.”

According to a statement issued by the Prime Minister’s Office, the meeting was told that around eight million students were already benefiting from the Teleschool initiative launched last month. It said that an e-Taleem portal would also soon be launched, and that Radio Pakistan would be utilized to reach students living in remote areas.

During the meeting, the prime minister also called for accelerating efforts to enforce a uniform curriculum nationwide, saying it was the government’s priority to end the “educational apartheid” resulting from multiple systems of education. He said efforts to implement the mainstreaming of madrassahs should be expedited, adding that focus should be on imparting modern education and skills to seminary students.

Khan was informed that a consensus curriculum had been formulated for grades one through five, which would be implemented from April 2021. Efforts are underway to formulate a uniform syllabus for sixth to eighth grade.

Addressing the issue of sub-campuses of federal universities in different provinces, the prime minister said a detailed strategy should be formulated to ensure quality education for all regions, adding there should be no hindrance to the education of students studying in these campuses.