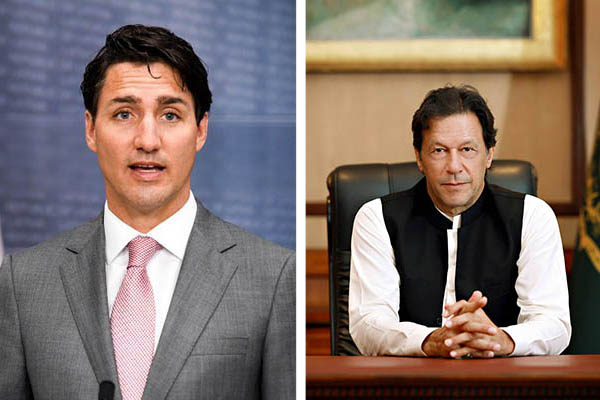 In a telephone call between the two leaders, Khan offered condolences for the death of nearly 4,000 people in Canada due to COVID-19, and said the unprecedented global calamity required closer international cooperation to overcome it.

According to a statement issued by the Prime Minister’s Office, Khan hoped Canada would lend its support to the Global Initiative for Debt Relief. He said Pakistan—similar to other developing nations—was confronted with the twin challenges of saving lives and containing the infection while simultaneously shoring up a struggling economy. Khan has, since day one, claimed Pakistan is too poor to properly implement movement restrictions to curb the spread of the virus, with senior leaders of his Pakistan Tehreek-e-Insaf claiming Pakistanis will just have to “learn to live” with the virus, as the country cannot afford to avoid its spread.

Both leaders discussed the ongoing situation arising out of the COVID-19 pandemic, and other matters of mutual interest. They also discussed the status of stranded citizens in each other’s states, and appreciated the facilitation provided by the two sides in resolving the woes of travelers.

During their conversation, Prime Minister Imran Khan expressed deep concern over the ongoing demonization of the Muslim minority in India over the spread of COVID-19, which Delhi has repeatedly claimed was boosted by a gathering of the Tablighi Jamaat. He also updated Trudeau on the current situation in India-held Jammu and Kashmir, noting that communication restrictions and lack of access to medical and other essential supplies was compounding the peril posed by COVID-19 to Kashmiris.

Both premiers agreed to remain closely engaged on all matters of common interest.