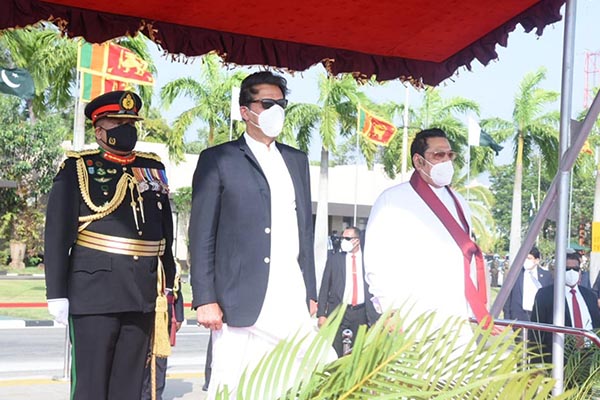 During the first day of Khan’s two-day official visit to Sri Lanka, the two countries agreed to strengthen their bilateral ties in areas such as trade, investment, science and technology, tourism and culture. In their one-on-one conversation, the prime ministers pledged to reinforce a broad-based and enduring partnership between their nations to advance the shared objectives of peace, stability, and economic prosperity in South Asia.

Around 40 leading Pakistani businessmen are accompanying Khan during his visit. The Pakistan mission in Colombo has also invited 200 businessmen and investors from Sri Lanka to the joint trade and investment conference being held in Colombo on Wednesday (today) under the auspices of the commerce ministry and the Trade Development Authority of Pakistan.

Khan said he had asked his delegation to find ways and means to enhance trade and economic relations between the two countries through increased connectivity. A statement issued by the Foreign Office said that Pakistan’s shifting focus from geo-strategic to geo-economics was underscored during the discussions, with special focus granted to the three pillars of Pakistan’s economic security vision—peace, development partnerships, and connectivity.

The prime minister emphasized the importance of resolving disputes through dialogue and promoting the vision of peace, progress and prosperity in South Asia and beyond. Both sides reiterated their commitment to the principles and objectives of the SAARC Charter and agreed on the importance of taking forward the regional bloc’s process for greater cooperation.

Both the Sri Lankan and Pakistani premiers noted that their countries had done relatively well in handling the COVID-19 pandemic. In their one-on-one meeting, they stressed the importance of Prime Minister Imran Khan’s Global Initiative on Debt Relief for developing countries to mitigate the adverse socio-economic impacts of the pandemic.

Khan underscored Pakistan’s commitment to peace and stability in the region, adding that constructive engagement by all sides was necessary to achieve a political solution to the conflict in Afghanistan.

Appreciating the rich Buddhist heritage of Pakistan and the great potential for religious tourism, Colombo and Islamabad agreed to enhance mutual collaboration by sharing expertise in the hospitality industry, training, and capacity-building.

Both sides expressed satisfaction over the close cooperation between the two countries at multilateral fora and resolved to further deepen strategic communication and coordination at all levels.

Prime Minister Khan and Prime Minister Rajapaksa witnessed the signing of five memorandums of understanding for enhanced bilateral cooperation in the fields of investment, science and technology, and industrial technology. According to Pakistan’s Foreign Office, the reconstitution of the Sri Lanka-Pakistan Parliamentary Friendship Association would also be announced to further promote parliamentary exchanges between the two countries.

A Sri Lankan foreign ministry statement said the visit would feature a business and investment forum, as well as a sports diplomacy initiative.

Prime Minister Khan expressed his deep appreciation and sincere gratitude to Prime Minister Rajapaksa for the warm welcome and gracious hospitality accorded to him and his delegation. He also extended a cordial invitation to his Sri Lankan counterpart to visit Pakistan at his earliest convenience.

The first day concluded with a banquet hosted by Rajapaksa in honor of Khan and his delegation.