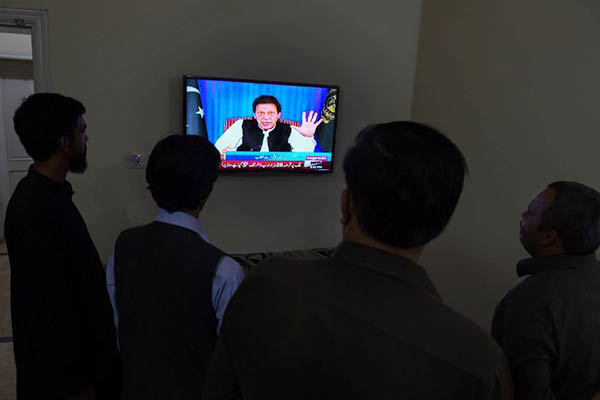 Imran Khan made his first speech as Pakistan’s prime minister late on Aug. 19, giving a wide-ranging, televised address in which he announced reforms targeting corruption and focusing on human development in the rapidly growing country.

Khan addressed the nation for more than an hour, repeating many of his campaign pledges to build an Islamic welfare state but also touching on issues rarely mentioned by former prime ministers such as fighting child sex abuse and climate change.

Without naming names, he vowed to improve Pakistan’s relationship with neighboring countries, and to improve security in restive Balochistan province and the tribal areas along the border with Afghanistan. “We want peace, because Pakistan cannot prosper until the peace is restored,” he said.

Khan said he has retained the interior ministry portfolio for himself as he personally oversees steps against money laundering and graft.

The former cricketer also announced an austerity drive to trim back the trappings of government, such as selling most of the vehicles allotted to the prime minister, cutting down on staff and turning the official residence into a university. “I will fight the corrupt. Either this country will survive or the corrupt people,” he said.

Khan called for a progressive tax system, vowing to spend the money on the neediest—such as malnourished children, and justice for victims of abuse—and on fighting climate change. Few in Pakistan pay their taxes currently, and he did not explain how he would enforce more taxation, especially on the rich.

Khan’s leadership represents the end of decades rotating between two establishment parties, punctuated by periods of Army rule. But he and his cabinet face a myriad of challenges including a faltering economy, militant extremism, water shortages, and a rapidly growing population negating growth in the developing country, among others.

The most pressing is a looming balance-of-payments crisis, with analysts predicting Pakistan will have to go to the International Monetary Fund for a bailout. Khan did not confirm if his government would ask for the loan, but stated: “We have to stand up on our own feet… By going with a begging bowl, no nation becomes great.” His finance minister Asad Umar has said they will decide by September if they will go to the IMF.

The July 25 election that brought Khan’s Pakistan Tehreek-e-Insaf party to power was branded “Pakistan’s dirtiest,” with accusations throughout the campaign that the playing field was tilted in Khan’s favor.