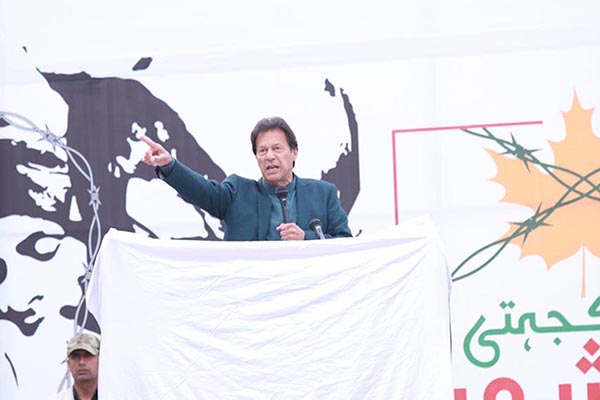 Any Indian “misadventure” targeting Pakistan will be its last, as Islamabad is fully capable of winning tough wars, Prime Minister Imran Khan warned on Thursday.

Rebuffing a recent statement by Modi in which the Indian leader had claimed Delhi could “defeat” Pakistan’s armed forces within 11 days, the prime minister said Modi must study history to learn the eventual disaster that awaited all tyrants. He said Pakistan’s battle-hardened armed forces were fully capable of winning tough wars, including the fight against terrorism and vowed that whenever the people of India-held Kashmir needed help, the entirety of Pakistan would rise up to support them.

Khan said Pakistan was a peaceful country, but had no fear of fighting oppression if it were forced to do so. He reiterated that he would personally serve as an ambassador for Kashmiris to ensure their plight was not ignored.

The prime minister said his visit to Mirpur was of particular significance, as it showed Islamabad’s solidarity with the eight million residents of India-held Jammu and Kashmir. As is his habit—or compulsion—Khan once again accused previous governments of failing Kashmir. He claimed that his government had managed to internationalize the issue of Kashmir in the six months since Delhi imposed a sweeping crackdown in the region, adding that India’s ongoing human rights abuses in the Valley were now visible for the entire world to see.

Poking fun at India’s repeated claims of staging an airstrike on militant targets in Balakot, Khan said Modi had “in fact martyred” Pakistan’s trees. On the other hand, he added, Pakistan had returned a captured Indian fighter pilot as a goodwill gesture to encourage regional peace. It was unfortunate, said Khan, that Modi dubbed Pakistan’s overtures of peace as acts of fear.

The prime minister predicted that the day India finally ended its curfew and communications blockade of Kashmir, a mass of people would take to the streets to voice their protest and India would lose Kashmir forever.

Also addressing the rally, Foreign Minister Shah Mehmood Qureshi said the sea of Pakistani flags in Mirpur was a message to Indian Prime Minister Modi that every Pakistani citizen would always stand with their Kashmiri brethren. Similarly, Kashmir Affairs Minister Ali Amin Gandapur said Pakistan would continue to support Kashmiris in their just demand of right to self-determination. He said India should realize that the passion of Kashmiris would ultimately win over its abusive actions to curtail their freedoms.

India-held Kashmir has now been under virtual lockdown for six months. Multiple independent reports have alleged that there is a simmering anger in the region that could spiral out of control if India does not make efforts to allay the concerns of Kashmiris following the Aug. 5, 2019 decision to revoke the region’s autonomy.