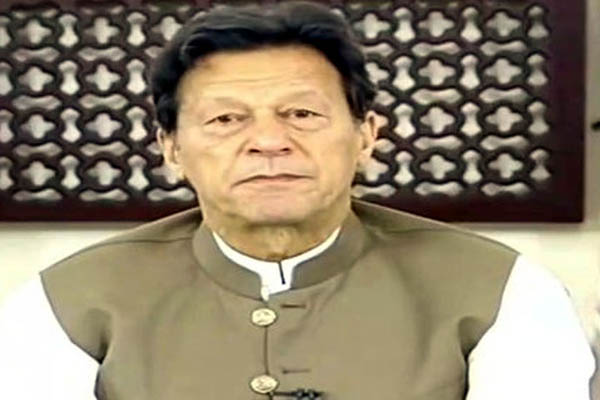 Prime Minister Imran Khan on Sunday once again called on the public to adopt preventative measures, including mask compliance, to curb the spread of the third wave of the coronavirus pandemic, warning that the government will have no choice but to implement harsher measures if the situation spirals out of control.

During a nationally televised question and answer session—broadcast live on various public and private news channels—he said wearing masks was the easiest and most effective way to ward off COVID-19. “I urged all of you to wear a mask, and I appeal to you to follows SOPs—both for your own sake and for the sake of Pakistan,” he said.

Claiming that Pakistan had managed to overcome the first two waves thanks to the blessings of God, he said the third wave was proving far deadlier than the first two. “People are roaming [in public] without any fear. If it [COVID] continues to spread, it will place our hospitals under pressure,” he said, adding that thus far the government had sought to protect livelihoods by avoiding lockdowns and implementing targeted movement restrictions. “However, if the situation worsens, we will be forced to take the next step [of lockdown],” he warned.

“No one can predict how long or how bad this third wave can get,” he said, stressing that this was why everyone must unite to follow SOPs.

To a question on how the government planned to curb a surge in incidents of rape and sexual violence, especially against children, the prime minister claimed this was a battle that required society to work with the government and judiciary. Claiming that only 1 percent of the actual crimes were highlighted by media, he repeatedly stressed that societies must avoid “fahashi” (vulgarity) to protect themselves.

“[Divorce rates] have gone up by as much as 70 percent [in the U.K.] due to vulgarity in their society,” he claimed, adding that the concept of pardah, or modesty, in Islam was intended to keep people’s “temptations” under control.

“There are many people in society who cannot control their desires” when they are exposed to such temptations, he claimed, adding that this would inevitably provoke a reaction. He also suggested that sexual violence in India had risen because Bollywood had followed the trends of Hollywood and increased “vulgarity” there.

“This was one of the reasons I brought [Turkish serial] Ertugrul to Pakistan,” he said, claiming it did not contain any controversial or immoral content.

The premier’s statements provoked outrage on social media, with many users saying his statement provides justification for rapists who could claim to have been “tempted” to commit sexual violence. Instead of focusing on vulgarity, they say, the government should ensure enforcement of laws to prevent any criminals from escaping justice.

To another question on corruption, the prime minister said this was a problem that required the entire nation to unite on a single platform. “Imran Khan alone cannot tackle these problems,” he said, adding that the public needed to support the government’s measures to curb such practices.

He said societal changes did not occur overnight, adding that the nation would see progress on economic stability and development in the days to come. “People have high hopes that Imran Khan will come and change the country; this only happens in fairy tales,” he said, perhaps forgetting that he had been the one to make unreasonable promises such as eradicating all corruption within “90 days” of coming into power.

Claiming that there were two types of revolutions—bloody and through the ballot—he claimed that revolutions brought about by the ballot faced difficulties in imposing changes. “Here the judiciary protects a person who looted public money and NAB protects a person who stashed away $60 million national wealth to the Swiss bank,” he said, referring to frequent targets of blame Nawaz Sharif and Asif Ali Zardari.

To a caller who urged Khan to either resolve the issue of inflation of essential commodities or “allow the people to panic”—a reference to his oft-quoted refrain of ‘ghabrana nahin hai’ (don’t panic)—the prime minister reiterated his claims of food items being expensive because farmers who supplied them wanted their wares to be sold at higher rates in the open market. “The middlemen are making a lot of money from this,” he claimed.

The prime minister claimed his government was working towards an “ingenuous” solution through which producers of edibles would be directly linked to consumers. He also claimed that the masses would soon see the positive effects of the rupee strengthening against the U.S. dollar, adding that this had already resulted in a nominal decrease in fuel prices.

Khan also referred to “hoarders and mafias,” claiming they were preventing necessary food items from being sold at low prices in the country. “For the first time, we are going after mafias in Pakistan,” he claimed. “The FIA completed its inquiry for the first time to bring to everyone’s knowledge how a few people hoard basic food items so their prices skyrocket and they make profits out of it,” he added.

“You need not be frightened [about inflation] because the government is working towards tackling it,” he claimed, adding the government wanted to make the country self-sufficient in agriculture to combat price hikes brought about by heavy import fees.

To a question on the government deciding against resuming trade with India, the prime minister reiterated that there would be no normalization of ties with Delhi until it revisits the abrogation of Jammu and Kashmir’s special constitutional status. “We have fought the Kashmiris’ case at all global fora in a way that never happened in the past,” he claimed.

To another question on whether the government was “placing the State Bank of Pakistan” under control of the International Monetary Fund, Khan said that he would not take any decision against national interests. However, he admitted that the IMF loan had been secured through certain conditions that had to be fulfilled.

The prime minister also cited his government’s health card initiative as a “revolution,” claiming it would help the impoverished receive quality healthcare.

On a question about illegally housing societies, Khan claimed “powerful elements” were involved in such activities, and vowed to ensure that inhabitants of slums would be granted ownership rights through low-cost housing options.

The prime minister also said that countries progressed due to greater uptake of higher education. “We also have to think about what sort of high education we want [to impart],” he said. “Buildings do not bring about quality education. A great emphasis should be on the type of degrees they are handing out to students,” he said, adding that the government was initiating changes to the Higher Education Commission as part of its goals in this regard.