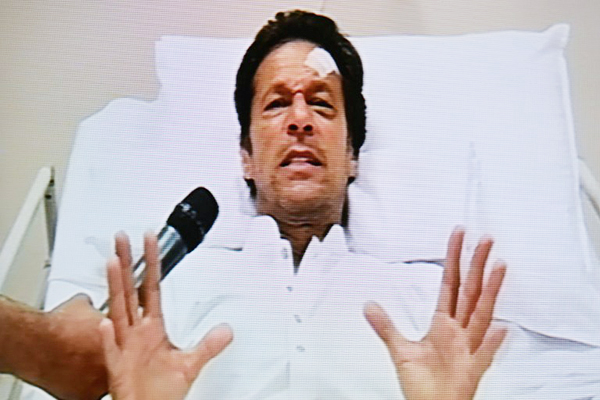 Pakistan Tehreek-e-Insaf chief Imran Khan welcomed the high voter turnout on Saturday for the country’s national and provincial assemblies, but said his party would submit a detailed report on alleged rigging in the May 11 elections.

“I congratulate the entire nation for taking part in such a massive democratic process. We are moving forward on the path of democracy,” the former cricket star said.

Khan, who fell from a hoist raising him to the stage at an election rally in Lahore on May 7, electrified much of the campaign with his calls for reform and galvanized many young people to take part in the democratic exercise for the first time. “Even those people who never voted in their life came out, and the entire nation is happy to see it. Now there is awareness among the people of Pakistan that their fate is in their hands,” Khan said.

Khan’s PTI is projected to win more than 30 seats and become the second largest party in the National Assembly. It is also expected to form the next provincial government in violence-torn Khyber-Pakhtunkhwa province. In reference to allegations of vote rigging made by members of his party, Khan said: “God willing, we will issue a white paper.”

But while PTI’s showing was far short of the victory for which he campaigned, he spoke of satisfaction about the participation of young people and women. Female turnout is traditionally low in conservative regions. “There is usually victory and defeat, but all the pain of this defeat evaporated after I saw enthusiasm in the youth,” he said. “I also thank our women. Never in the history of Pakistan have women come out and voted in such a big number. It is heartening to see that they have also contributed to efforts to make a new Pakistan.”

A LOT OF RIGGING PROOFS ARE THERE IN Pakistan..Specially in karachi and Hyderabad..check it
http://www.etechcrunch.com/a-bold-video-made-on-election-rigging-in-pakistan/

khan is right.we r with u.