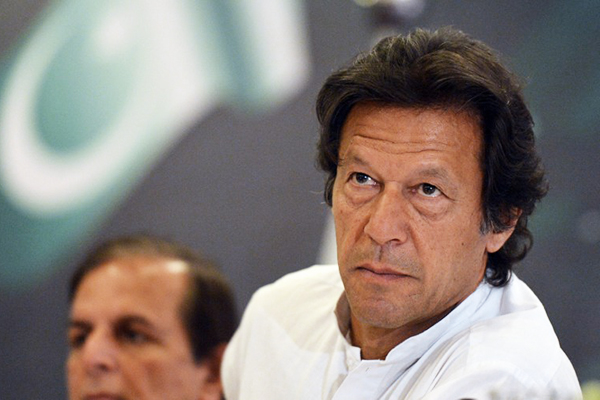 Rent by infighting, the electoral prospects of Khan’s PTI dim.

If Imran Khan’s spokesperson is to be believed, the men who stormed his house in Islamabad on April 17 were not just troublemakers, they were potential assassins out to get Khan and his family. But the reality is just as troubling, and doesn’t augur well for his ambition to sweep the national and provincial elections on May 11: these were men from Khan’s own Pakistan Tehreek-e-Insaf party, trying to get their imperious but inspiring leader to yield to their demands.

The break-in was “condemned in the strongest terms” by Khan’s tempestuous spokesperson Shireen M. Mazari, an old stalwart who has only recently rejoined the party.

“The resultant attack on his house by a horde of 100 miscreants on Wednesday evening put his and his family’s lives at risk while the police and local administration did not respond despite repeated calls,” she said in a statement on the party’s website. “Imran’s brother-in-law was beaten and his female family members abused as his gate was broken and the hordes reached his house because no police protection was provided despite repeated demands.”

She has demanded the resignation of the caretaker interior minister, Malik Habib Khan, who she accuses of being partial to Khan’s opponents.

Islamabad police and the Interior ministry both deny the accusations. Bani Amin, chief of the capital’s police force, said the break-in was perpetrated by members of Khan’s own party—a fact which Khan has himself admitted to journalists. “No report has been registered,” said Amin. “If anything has happened at Imran Khan’s home, it may have been because of his workers who are demonstrating at his house for party tickets.”

Mazari took to social media to exclaim outrage over claims that the “hordes” were disgruntled party members. “Now Int Min blaming PTI workers 4 attack on IK home! But PTI workers wld not target IK or his family! Int Min shd resign immediately!” she tweeted, despite Khan’s admission to the contrary.

The spokesperson went into industrial spin-mode: “2 clarify: IK sought 2 allay fears of family by downplaying incident & saying unidentified attackers were disgruntled party workers BUT in dark 100+ mob charges in, who can tell who each individual is!” Mazari then tweeted about her ocular challenges, apologizing for a typo: “Sorry typing in loadshedding! Meant PTI!! Must remember to keep the glasses on!”

Khan has come a long way from Oct. 30, 2011, when he amassed hundreds of thousands in Lahore at a rally that catapulted him, finally, to the major leagues. But he chose to capitalize on that historic and inspiring show of strength by opening his party to fair-weather politicians. The disappointment of Khan’s young, and old, supporters cleaving stubbornly to his mantra of change was immediate. Rent by infighting, the party nosedived in opinion polls.

When it came time recently to decide which party member runs from which constituency, there was more turbulence. Several of the politicians Khan had once derided and then boastfully embraced turned on him. Former foreign minister Shah Mahmood Qureshi, previously with the Pakistan Peoples Party and before that with an iteration of the Pakistan Muslim League, is running as an independent candidate in one constituency despite being an office bearer in Khan’s party. Another former foreign minister, Sardar Aseff Ali, has called Khan a liar and quit.

Khan is running on the promise of change, vowing to deliver a “New Pakistan,” his campaign slogan, if voted into power. He notched up unrivaled and indisputable success first as the country’s top cricketer and later as philanthropic powerhouse. His political fortunes will turn now on how he is viewed by Pakistanis under the age of 31, who represent 34 percent of all 86.1-million registered voters. This is a demographic Khan cannot afford to lose if he is to seriously challenge former prime minister Nawaz Sharif’s Pakistan Muslim League (Nawaz), which is campaigning on experience and airing powerful, feel-good advertisements replete with practiced humility and Walden vows.

On April 15, Khan held a press conference trying to get his party back to its New Pakistan, maverick roots. Flanked by young men and women who had never run for public office before, he said, Khan declared he had made good on his commitment to “our youth and ideological workers” by allocating 80 percent of his party tickets to “first-timers” and some 35 percent to candidates below the age of 40. “Change is here with new, clean PTI candidates!” he tweeted. But tensions were present even there. While Khan was speaking, he was heckled by members of his own party. “Quiet down,” he ordered them, “your blackmail won’t work here.”

Dealing with the often violently disgruntled is not a Khan problem alone. In recent weeks, protesters have tried to march on President Asif Ali Zardari’s private home in Karachi, Bilawal House, and supporters of the PMLN have climbed electricity poles in Lahore—and even tried to self-immolate—to mark their displeasure over their respective party’s campaign decisions. But neither Zardari nor Sharif has asked to be protected from his own supporters.

Khan hosted another successful rally on March 23 in Lahore where he promised he would never lie to the people of Pakistan. Mazari, it seems, was not listening.

So when it happens in other parties, its all right, but when in PTI, you would write a whole column to prove how bad things are for PTI. Do us a favor, stop analyzing PTI at all.

that’s just the thing with PTI. maybe, just maybe, he’s taken on too much too soon…. cornered tigers can’t fight there way out every time i’d say. good luck to him, but really, he needs better people surrounding him, recognizable faces, with whom the people can actually form an affinity really…

The same Mazrai when recently asked about the Bomb blast on ANP Jalsa said,
“It’s only because of what ANP has been doing”. How much more hypocrite can she get?

ronaldo, it must be the mirror. Go break it so you can see other things in life besides stupidity.

@Fasih
1- why is it hard for you to stitch together IK and S Mazari’s comments. Makes perfect sense. Lets say YES they were party workers but we all know that just like other processions, some 3rd party would’ve diffused in to take advantage of the situation and created more mess than the protestors’ original intention was.
This happened when BB died. This happened when NS was sent to exile

2- PPP and PMLN’s heads aren’t asking for security as they already have a hoard of state owned and personal guards marching 24/7 to protect them. Do you think in today’s Pakistan if the president orders police to go and protect his personal house, police won’t obey? Seriously? You gotta be kidding!

Attack on Imran Khan- nothing could have saddened me more. May Allah grant him a long life, long enough to survive his upcoming government. That’s right- he IS clean sweping the next elections!

We will be able to see a clear picture only after May 11, such incidents do take place in politics. I personally feel that there is lack of maturity in PTI supporters.

Lack of Maturity or Gairatt ?

I think they are immature regarding politics. Talking about “Gairat” seems offensive.

whatever, Khan is still much much better than the rest.

He is just like the others, just give it a time and you’ll see..

Is this journalism or an opinion page. It appears the latter. By not clearly signposting this it’s disrespectful to the ‘Newsweek’ brand.

once a liar, always a liar… IK you’re worst then altaf

What?? Altaff has done something to your Mother ??

Ok there is problem in party workers but people just thinking either give him vote or not ? But at last they will take the decision this in his faver .

PMLN – Nawaz sharif d—l – read taliban shuffle by kim barker
PMLN – Hamza shahbaz – has a wife and kid – aysha ahad but deny it…. get his wife absued even in the jail.
PMLN – how they steal money from pakistan and transferred into UK – bbc documentaries
Watch programme qyoun dated 19 .04.2013 and be ashamed but how can you cuz you have already sold your soul for money right?

they are taking steps legally since they are genuine

Imran Khan is a liar