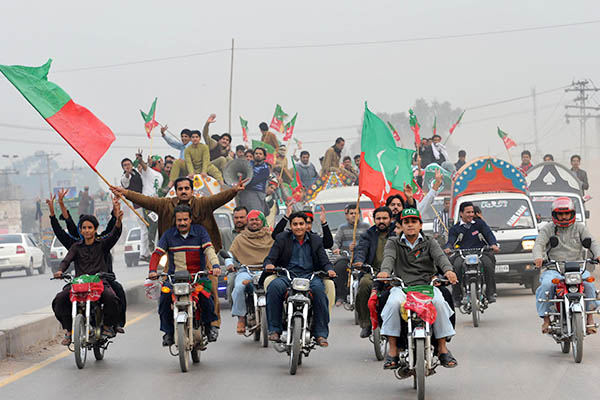 Around a hundred club-wielding activists from the PTI set up checkpoints in Peshawar in a crude and ostensible attempt to impede NATO supplies passing through the province. The vigilantes, carrying the PTI’s green-and-red flag, stopped trucks and hauled drivers from their cabs demanding to see paperwork and also broke open truck containers to check their contents.

“They are doing unlawful acts,” said Faiz Muhammad Khan, a truck driver transporting sanitary items to Afghanistan who was stopped by the vigilantes. “They broke the sealing of my container and forcibly examined the goods. If they want to block supplies for NATO forces, they should stop [them] in Karachi or at the border.”

One of the vigilantes, 28-year-old Asghar Khalil, said the PTI activists were merely heeding their leader Khan’s call to action and would not stop until drone strikes end.

Muhammad Faisal, a senior police official, said the vigilante actions were illegal, but he was powerless to act. “The protesters are doing unlawful acts by checking documents and screening goods, they don’t have authority. But we can’t take action against them because we have no instructions from the government. If the government orders us, we will stop this illegal activity.”

The PTI heads the Khyber-Pakhtunkhwa government, but authority for the highways lies with the federal government, which has so far made no move to block NATO supplies.

Khan has long opposed the U.S. drone campaign targeting Taliban and Al Qaeda militants in Pakistan’s tribal areas. He has intensified his rhetoric since a U.S. drone strike killed Pakistani Taliban’s Hakimullah Mehsud on Nov. 1 and another struck down Haqqani network leaders in Hangu on Nov. 21. Khan says Mehsud’s killing was a deliberate attempt by Washington to sabotage purported peace talks with the militants, who have killed tens of thousands in a six-year campaign of unyielding violence.

Pakistan is a key transit route for the U.S.-led mission in landlocked Afghanistan, particularly as NATO forces prepare to withdraw by the end of next year.

what idiotic comment by the “senior” police official, if they see somebody doing something illegal they will wait for government’s orders to make them stop? what does the govt pay you for? to take bhattas only?

supporters of the province’s ruling party conduct illegal stop-and-search (of the illegal transport). Hence the stop and is legal, as two negatives make a positive…