In A Dark, Dark Room 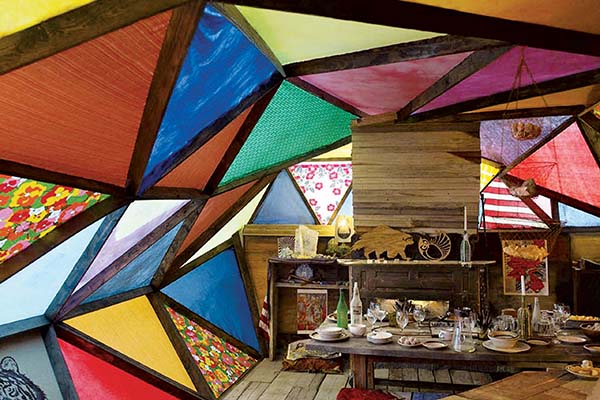 Leave the white gallery walls behind for an eerie trip back to the countercultural ’60s. It’s art—done differently.

[dropcap]L[/dropcap]eave the white gallery walls behind for an eerie trip back to the countercultural ’60s. It’s art—done differently.

Walking between the sterile white booths at Art Basel, the four-day art fair that opened in Switzerland on June 19, you get used to looking at art in a certain way: pieces are planted on the floor or hung from white plasterboard walls. They’re lit from above by spotlights. You stand in front of these pieces, walk around them, look into them.

Then you walk into another room—this one a print shop, with cans of chemicals stacked on paint-splattered wood floors. The walls are covered with ’60s magazines with cover lines that read “Plants Invented Animals” and “Who Put the Yellow Pills in Gordon’s Gin?” There’s also the “brain room,” where plants are intertwined with crystals and hooked up by wires to machines—a space meant to evoke that decade’s fascination with the study of plant consciousness. You get the feeling that the person who owns this eerie place has just departed: that the printing press has just stopped whirring and the owner has left his paintbrushes in the sink. It’s the kind of hair-raising, horror-film setup in which the good guy sneaks into the killer’s house and sees the kettle boiling. Someone is lurking.

“Where the f–k are we?” one art collector in a suit asked his companion as he ducked out of the dark print shop.

“I think that’s what we’re supposed to be wondering,” his friend replied.

This is Artichoke Underground, a 10-room installation by the artists Jonah Freeman and Justin Lowe—a dark and fascinating rabbit hole in the middle of a buzzing European art fair. It’s more of an “experience” than an installation, with its own smells and sounds and feelings. In yet a different room, the artists have recreated their favorite Punjabi restaurant on 1st Street and Avenue A in New York—a little red room ringed with tattered Bollywood posters and filled with the thick aroma of curry. There’s a walk-in freezer room, too, and a room whose walls are covered in sandy crystal growth.

Freeman and Lowe crafted this environment around the idea of a fictionalized, 1960s counterculture magazine called Artichoke Underground. Their protagonist is a Timothy O’Leary-like figure named Dr. Arthur Cook, a psychiatrist who, they imagined, experimented with group hallucinations and disseminated radical, leftist material. The artists say they were interested in the ways ideas spread at that time, and how people started harnessing experimental tools for communication. As Freeman explains it, they were exploring the “early ideas of the Internet,” a time when “people started to take media into their own hands and create their own alternatives.”

Artichoke Underground is the latest in a string of similar pieces by the duo—each installation marked with the team’s dark, now-signature trippiness. Their first piece, Hello Meth Lab in the Sun (which debuted at the Marfa Ballroom in Marfa, Texas, in 2008), sent viewers through a decrepit apartment that had been converted into a fully functional meth lab. It was eerie, frightening, and perfectly prescient to our cultural fascination with Breaking Bad. The piece was a hit and the art dealer Jeffrey Deitch asked the artists to create a version of it (which they called Black Acid Co-op) at his gallery in New York the next year.

“I’ve always admired artists who don’t just make a work to hang on the wall, but who create an immersive experience,” Deitch, now the director of the Museum of Contemporary Art in Los Angeles, tells Newsweek. “You’re inside their artistic world.” He says he was drawn to the “great feeling [they have] for sculpture, architecture, painting, collage, theater, political engagement, and sociology. It’s an amazing combination of insights and skills that is uniquely theirs.”

In 2010, the artists staged Bright White Underground, a site-specific installation that transformed Hollywood’s Modernist gem the Buck House (designed by R. M. Schindler) into a “happening”: an invented group hallucination (and party) staged by Cook. The following year, they put on a performance-art/fashion-show hybrid at the Hollywood Masonic Lodge in a piece they called Shadow Pool: A Natural History of the San San International. “I think from even our earliest shows, which put a meth lab next to a hippie commune [and] an Upper East Side museum, we have been juxtaposing these kinds of environments and the kinds of groups that would inhabit these environments,” says Freeman.

In a place like Art Basel—a fast-paced locus for big-chip collectors to pick up major contemporary art—a piece as labyrinthine and imaginative (and not to mention unruly) as Artichoke Underground seems somehow out of place. But the artists’ gallery, Marlborough Gallery in New York, says that the installation is purchasable in full form, and that smaller objects (like those plant-crystals) from within it are also for sale.

Breaking up the piece, however, would almost certainly strip it of its power. The excitement of experiencing this work comes from entering into a narrative. There is a cinematic quality to it, and you feel the presence of fully formed characters lurking just off-screen. Says Deitch of Artichoke Underground: “There is a great depth, like you have in a novel or a very good film—it’s not just a one-liner … You can get in and read the story.”