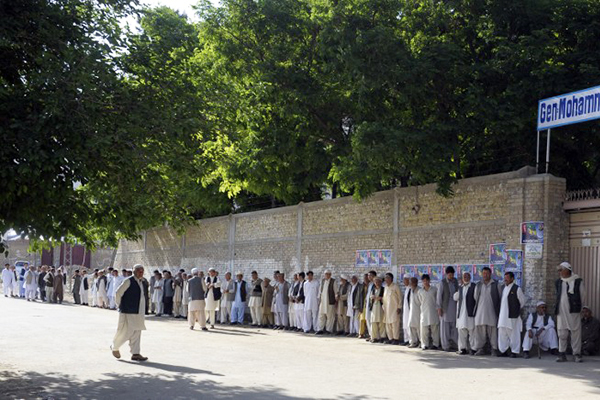 Polling in Quetta, May 11. Banaras Khan—AFP

Voter turnout for today’s elections was low in Pakistan’s troubled southwest, where fears of attack were high and security forces guarded polling stations.

Voters were subject to strict body searches by police and turnout appeared not to pick up, even after midday in Quetta. More women voters arrived as the day wore on, but there was little enthusiasm, with queues of dozens, rather than hundreds, of people outside polling stations in the provincial capital.

College student Hajra Wajahat, voting for the first time, said she wanted peace in her city, which has been rocked by sectarian killings, a separatist Baloch insurgency, and Islamist militant violence.

“I want people to vote to restore peace in Quetta. We have seen dead bodies of hundreds of people, shot dead in targeted killings, during the last 10 years,” she said. “Security is our major problem. There are many areas where we cannot even go because of security fears. This problem should come to an end and I want my people to move freely.”

A direct threat from the Taliban against the three main parties in the outgoing federal government curtailed public rallies before the polls and heightened fears of violence on Election Day. The Taliban have made good on their threat of violence today in several cities and towns across Pakistan.

Turnout, however, was higher in Quetta’s Shia-dominated Hazara Town. Ethnic Hazaras, who are members of Pakistan’s Shia minority, were earlier this year the target of two devastating bombings in Quetta that killed nearly 200 people. Police and security forces cordoned off the neighborhood as Hazaras came out to vote.

“People are scared and we have to convince them to come out of their houses to vote,” said Qudsia Hussain, whose husband is running for the national and provincial assemblies from the Hazara Democratic Party.

Meanwhile, the Election Commission of Pakistan estimates that some 30 percent of the 86.2 million registered voters have turned out overall to vote. “The turnout is really encouraging. Now we are at 30 percent,” said spokesman Khurshid Alam. “We expect it will be close to 60 percent at the end of the day.” Turnout was 44 percent in the 2008 elections.