Home Scope In Bihar, One of Buddhism’s Holiest Sites Bombed

In Bihar, One of Buddhism’s Holiest Sites Bombed 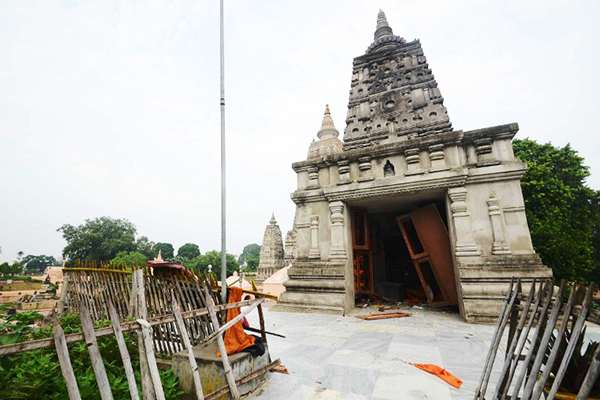 Multiple small bomb blasts at one of Buddhism’s holiest sites—the Bodh Gaya temple complex in eastern India—wounded two monks on Sunday, but the historic temple itself was not damaged, police said.

The Indian government called the blasts a “terror attack” after eight bombs exploded at the complex in Bihar state, which attracts Buddhists and other visitors from all over the world. No one claimed responsibility for the attack, but police said they earlier warned officials that Islamic militants could target the site as revenge for Buddhist violence against Muslims in neighboring Myanmar.

“The holy bodhi tree is safe and there is no damage to it,” said Bihar police chief Abhayanand, who goes by one name. Along with temples, dozens of monasteries, housing monks from around the world, are located near the complex, which is believed to contain the tree under which the Buddha reached enlightenment in 531 BC.

Indian Prime Minister Manmohan Singh condemned the blasts at the complex, a UNESCO World Heritage Site, saying: “Such attacks on religious places will never be tolerated.” Junior home minister R. P. N. Singh told reporters “it is clear that this was a terror attack” and that teams of investigators were probing the incident.

Police in New Delhi had warned state officials last winter that Islamist militants from the Indian Mujahideen group were planning to attack the complex, said an official focused on antiterrorism operations. “We told state police that the Indian Mujahideen planned to carry out an attack as retaliation for Buddhist violence against Muslims in Myanmar,” he said. “We told them that Bodh Gaya is a probable target.”

Indian Mujahideen has admitted to carrying out numerous bomb blasts in recent years, and is often listed as a suspect in attacks across the country. Attacks on Buddhists are rare in India, but there have been tensions in the wider region recently following clashes between Buddhists and Muslims in Myanmar, Sri Lanka, and Bangladesh.

Additional security forces have been deployed to guard the complex after the blasts, which wounded two monks, a 50-year-old Tibetan, and a 30-year-old Myanmar national, who have been taken to hospital. Windows were shattered at one of the buildings, while a wooden door at a small temple was destroyed and debris was strewn inside another building.

Sri Lankan Buddhist monk Gomarankadawala Hemarathana, 28, who raced to the scene after the blasts, said a bomb had been placed at the base of the statue. “It is a miracle that the Buddha statue was not harmed. The bomb was placed at the foot of the statue but it did not go off,” he said.

Former local legislator Sarbajeet Kumar said he was on his daily morning walk to the temple when the bombs exploded. “Suddenly I saw smoke and heard the sound of the blasts. I realized that something bad had happened and ran for shelter,” he told local reporters.

The Bodh Gaya complex, 110 kilometers south of the state capital Patna, is one of the earliest Buddhist temples still standing in India.

The first temple was built in the 3rd century BC by the Buddhist Emperor Asoka and the present temples date from the 5th or 6th centuries, according to UNESCO. The complex houses the holy bodhi tree as well as the giant Mahabodhi statue of Buddha, and multiple shrines marking the places where he is believed to have spent time after his enlightenment. After his meditations beneath the tree, Buddha is said to have devoted the rest of his life to teaching and he founded an order of monks before dying aged 80.

The Dalai Lama makes frequent trips to the complex, which attracts visitors during the peak tourist season from October to March.