Home Scope In Egypt, Mansour Takes Over After Morsi’s Overthrow

In Egypt, Mansour Takes Over After Morsi’s Overthrow 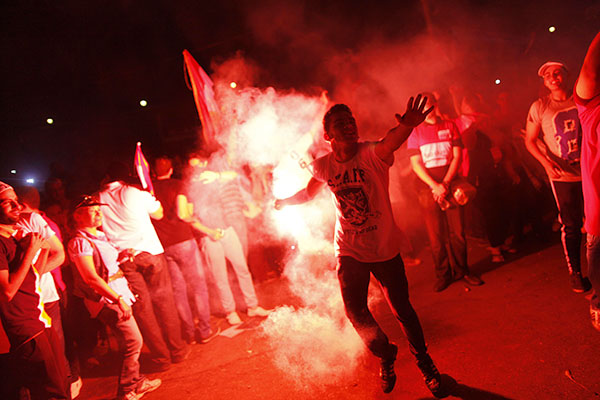 Egypt’s Army overthrew and detained the country’s first democratically-elected president, Mohamed Morsi, in an abrupt end to his first year in office following days of bloodshed and protests demanding his resignation.

A senior military officer said on Thursday the Army was “preventively” holding Morsi, whose government unraveled after the military gave him a 48-hour ultimatum in the wake of massive demonstrations against him on June 30, exactly a year into his rule.

Morsi’s defense minister, armed forces’ chief Gen. Abdel Fattah al-Sisi, announced the leader’s overthrow on state television on Wednesday, even as police began rounding up key Morsi aides and leaders of the Muslim Brotherhood. Warrants have been issued for the arrest of a total of 300 Brotherhood officials, state media reported.

Egypt’s Chief Justice Adly al-Mansour will serve as interim president until new presidential elections are held, according to the Army’s plan. Mansour, a hitherto little known judge, will likely be sworn in on Thursday.

Thousands of protesters camped out on the streets of Cairo for days celebrated wildly at the news of Morsi’s downfall, letting off fireworks and sounding car horns. But at least seven of Morsi’s supporters were killed in clashes with security forces in Alexandria and the eastern city of Marsa Matrouh, security officials said. The official MENA news agency also reported three people killed in the southern province of Minya when pro-Morsi supporters attacked his opponents. Already in the week leading up to Morsi’s downfall, at least 50 people died in clashes between his supporters and opponents.

Morsi “is being held preventively for final preparations,” the military official said, suggesting the deposed leader might face formal charges over accusations made by his opponents. Morsi had been summoned for questioning by a court over his escape, along with other inmates, from prison during the revolt that overthrew his predecessor Hosni Mubarak in 2011. The military official suggested prosecutors in the case might now charge him.

Morsi was detained along with senior aides after issuing a defiant call for supporters to protect his elected “legitimacy,” in a recorded speech hours after the military announced his ouster. “We had to confront it at some point, this threatening rhetoric,” the military officer said. “He succeeded in creating enmity between Egyptians.”

Police have begun arresting leaders of Morsi’s Muslim Brotherhood movement, according to an interior ministry general. Saad al-Katatni, head of Morsi’s Freedom and Justice Party, was already in custody, he added.

Thousands of Morsi’s supporters remained camped out in northern Cairo, but Egyptian television stations stopped broadcasting live feeds of the pro-Morsi rally after the military announced his overthrow.

U.S. President Barack Obama said he was “deeply concerned” over Morsi’s ouster and urged the Army to refrain from “arbitrary arrests” of Morsi and his supporters. In May, Washington approved $1.3 billion in military aid to Egypt. That was now under review, said Obama, as he called for a swift return to democratic rule.

In his speech, Sisi laid out details of the roadmap for a political transition. The Morsi-drafted Constitution would be frozen and presidential elections held early, he said, without specifying when. The armed forces, which had deployed troops and armor across the country, would “remain far away from politics,” he stressed.

In Cairo, celebrations at the news began immediately. “It’s a new historical moment. We got rid of Morsi and the Muslim Brotherhood,” said one celebrator, Omar Sherif.

In an amateur video posted online after Sisi’s announcement on Wednesday, Morsi declared: “I am the elected president of Egypt” and urged people to “defend this legitimacy.”

Morsi’s opponents had accused him of failing the 2011 revolution by concentrating power in the hands of his Muslim Brotherhood. His year in power was marked by a spiraling economic crisis, fuel shortages, and often deadly opposition protests.

The embattled 61-year-old had proposed a “consensus government” as a way out of the crisis, the worst since the 2011 uprising that ended three decades of authoritarian rule by Mubarak.

But it failed to satisfy his critics and the Army stepped in.

Opposition leader Mohamed ElBaradei, former head of the U.N. nuclear watchdog, sat beside Army chief Sisi as he announced on state television that Morsi’s rule was over. So too did the heads of the Coptic Church and Al-Azhar, Sunni Islam’s highest seat of learning. The choreography was designed to show broad civilian support for the military’s move against Morsi.

Already, security forces have shut down broadcasts from a Muslim Brotherhood television channel, according to a Morsi aide. Staff of Al Jazeera’s Egyptian affiliate was also arrested after the channel aired a defiant speech by the deposed president, the station reported.