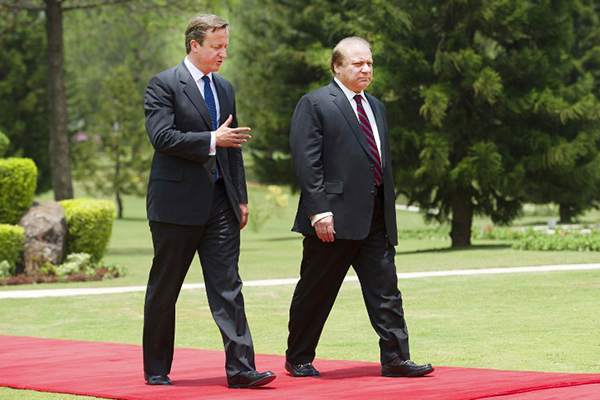 ‘The ties that join the U.K. and Pakistan in an unbreakable partnership are as strong as ever.’

Prime Ministers Nawaz Sharif and David Cameron today reiterated their confidence in the future of Pakistan and U.K. relations, committing to intensive cooperation as equals toward greater progress and prosperity. They agreed to find new ways to make the close and cooperative friendship beneficial for the people in both countries.

As the first foreign head of government to visit Pakistan since the new government took office, Prime Minister Cameron expressed his confidence in the future of Pakistan, congratulating its people and institutions on the steps they have taken toward a strong, stable democracy.

Building on the existing warm friendship and confidence in Pakistan’s economic future, the prime ministers focused on trade, pledging a new target of increasing bilateral trade to £3 billion by 2015, up from their previous commitment of £2.5 billion.

Over 100 British companies are operating successfully in Pakistan. This includes Mott MacDonald in infrastructure development; Unilever in consumer goods; and GlaxoSmithKline in pharmaceuticals. A major British company Orion Energy has concluded a joint venture partnership with Pakistan Petroleum Limited to utilize Pakistan’s natural gas reserves to generate electricity. The second annual trade conference will be hosted this autumn in London to encourage more companies to follow their success. Both sides will encourage strong participation from the energy sector. Prime Minister Sharif pledged his government’s full support to creating the right environment to attract further investment.

Prime Minister Sharif informed Prime Minister Cameron about his ambitious plans to enhance growth, create jobs, and reduce poverty to create a brighter future for the people of Pakistan. There is now an opportunity to take tough decisions on solving the energy crisis, increasing trade and investment. The U.K. will continue to play its leading role in the international community to support Pakistan, to enhance economic growth, including through increased market access to the European Union. Under the framework of the Enhanced Strategic Dialogue, the two governments will continue their regular dialogue on economic reform.

Looking to the next generation, the U.K. and Pakistan will continue to work together to help Pakistan’s people fulfill their potential. Prime Minister Sharif reiterated his commitment to increase the number of children in schools and the quality of education in Pakistan, and welcomed a continuing, strong partnership with the U.K. to transform education in Pakistan.  Prime Minister Cameron welcomed empowerment for the poorest through Pakistan’s increased funding for the income support program and also recommitted ongoing U.K. assistance for the program.

The prime ministers acknowledged the positive contribution of the British and Pakistani communities living in each other’s countries toward the development and prosperity of both countries. Prime Minister Cameron announced that the British Council would be opening a library in Lahore and a cultural space in Karachi. The U.K. and Pakistan are committed to fully exploiting the enormous potential in their relationship through strengthening practical cooperation in ways that are mutually beneficial. The ties that join the U.K. and Pakistan in an unbreakable partnership are as strong as ever.

Prime Minister Cameron paid tribute to the people of Pakistan who had sacrificed so much and still clearly rejected the terrorist violence and intimidation. The U.K. will work in partnership with Pakistan providing expertise in support of Pakistan’s developing strategy on counterterrorism. The U.K. will provide more equipment to tackle the scourge of improvised explosive devices and support Pakistan in improving the security of its infrastructure, including sharing the U.K.’s expertise in safeguarding sporting events.

Prime Minister Sharif apprised Prime Minister Cameron about the ongoing Pakistan-India peace process. They underscored the importance of peace, stability, and security in Afghanistan and reaffirmed their support for an Afghan-led and Afghan-owned reconciliation process.

Intensive, practical cooperation will capitalize on the growing joint opportunities on trade, investment, energy, and in the cultural spheres. In the coming months, the adviser to the prime minister on national security and foreign affairs, Sartaj Aziz, and Secretary of State William Hague will discuss specific measures through the Enhanced Strategic Dialogue which underscores the unbreakable partnership between Pakistan and the U.K. There will be regular in-depth dialogue between ministers, including the U.K. Secretary for International Development Justine Greening on U.K. development cooperation, and Home Secretary Theresa May who will intensify mutually beneficial cooperation.  Prime Minister Sharif accepted an invitation to visit the U.K. to carry forward the process of further enhancing cooperation between the two countries.

Newsweek Pakistan’s editorial department has had no role in the creation of this content.