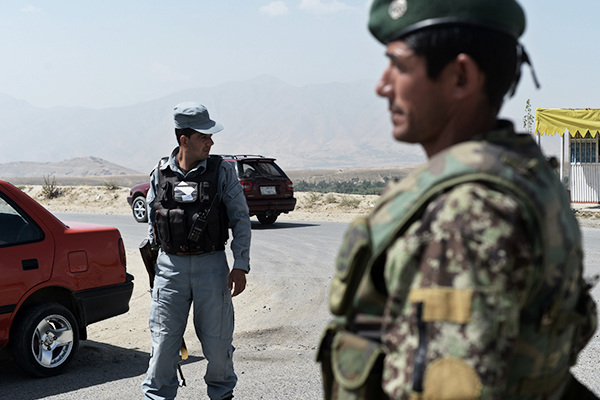 An Afghan soldier killed a U.S. general on Tuesday and injured more than a dozen others after opening fire at Kabul’s Marshal Fahim National Defense University.

The shooting, which killed Maj. Gen. Harold J. Greene, marks the first time that a U.S. general has been killed in a combat zone since Vietnam. Greene is the highest-ranking U.S. military casualty since 9/11, when Lt. Gen. Timothy Joseph Maude was killed at the Pentagon.

“Our thoughts and prayers are with Maj. Gen. Harold J. Greene’s family, and the families of our soldiers who were injured today in the tragic events,” said U.S. Army chief Gen. Ray Odierno. Greene was the deputy for acquisitions at the U.S. Army headquarters in Washington.

A U.S. official, speaking on condition of anonymity, said that around 15 people were injured, including eight Americans. The nationalities of the other victims were unclear, but the German Army said that one of its generals was also wounded. Officials in Kabul said at least three Afghan officers have also been hurt.

The attacking Afghan soldier killed himself after his rampage at the university, which was being visited by high-level NATO officers

The latest incident has rocked the U.S.-led project to train up the Afghan Army as NATO combat forces withdraw after 13 years of fighting the Taliban. The assault will do little to alleviate deep mistrust between international troops and their Afghan allies.

The shooting was by far the highest profile “insider attack” of the Afghan conflict, in which scores of U.S.-led NATO troops have been killed by Afghan soldiers turning their guns on their allies. Also known as “green on blue” attacks, the killings have bred fierce mistrust among soldiers and forced joint patrols to be overseen by armed guards.

The Taliban did not immediately claim responsibility for the attack, and Western officials say that most such attacks stem from personal grudges and cultural misunderstandings rather than insurgent plots.

“Insider attacks” declined rapidly last year as NATO combat troops closed many bases and reduced operations before their complete withdrawal by the end of this year. Screening of Afghan Army recruits was also tightened.

John Kirby, the Pentagon spokesman, described the attack as an isolated incident, and credited Afghan troops for their work in securing the recent national elections. “It’s impossible to eliminate—completely eliminate—that threat, I think, particularly in a place like Afghanistan, but you can work hard to mitigate it,” he said.

President Hamid Karzai condemned Tuesday’s attack as a “cowardly” strike against Afghan and NATO officers. “It is the work of those enemies who do not want to see Afghanistan have its own strong institutions,” he said.

Gen. Mohammed Afzal Aman, chief of staff for operations at the Afghan Ministry of Defense, said that three Afghan Army officers were injured. “[International Security Assistance Force] have quarantined the site, allowing nobody, including Afghan forces, to approach,” he said.

The Afghan military has been built from scratch since the fall of the Taliban regime in 2001, and it has struggled with high casualty rates, “insider attack” killings, mass desertions, and equipment shortages. In February this year, two Afghan men wearing military uniforms shot dead two U.S. soldiers in the eastern province of Kapisa.

Also on Tuesday, Afghan officials accused an ISAF airstrike of killing four civilians in the western province of Herat. “After rockets were fired at Shindand airbase, an aircraft carried out strikes on the area where they were launched,” said Herat’s deputy governor Asiludin Jami. “A man, a woman, a kid, and a teenager were killed. They were all civilians.”

ISAF said it took all allegations of civilian casualties seriously, and was assessing the facts surrounding Monday’s incident.