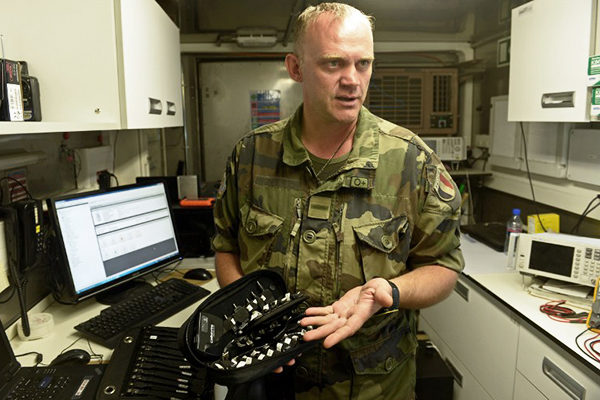 In a discreet lab in Kabul, a French military officer scans a long list of phone numbers scrolling down a computer screen. “This is the call that triggered the explosion,” he says, pointing.

The French-run facility is the nerve center of NATO efforts to analyze and trace how thousands of homemade bombs are becoming ever more sophisticated. The team of 15 forensic specialists puzzle over how the devices are designed and how to prevent them from being detonated—clues that could also lead back to the bomb-makers themselves.

The improvised explosive device has become the signature guerrilla tactic in Afghanistan, where the Taliban and other insurgent groups have fought U.S.-led forces since 2001. The device typically uses old battlefield ordnance, explosives from mining or fertilizer, and is detonated by an electronic signal such a phone call, a manual trigger line or a pressure plate. Cheap, relatively easy to make, and adaptable, it is the militants’ weapon of choice often planted in dirt road tracks, killing U.S. and Afghan soldiers, government officials, and civilians on a daily basis.

The Multi-National Theatre Exploitation Laboratory is located inside the Kabul airport military complex, a large highly-secure area that is a major base for NATO’s International Security Assistance Force. Clean, calm, and quiet, the lab is a far cry from the frontlines where the IEDs are picked up. The devices are investigated in small rooms containing computers, monitors, spectrum analyzers and oscilloscopes measuring voltage.

It is here that electronic experts Adjt. Olivier, who gave only his first name in line with French military policy, says he makes hard drives, USB memory sticks, data cards, and mobile phones “talk to him.”

“You can retrieve calendar items, incoming and outgoing calls, contact lists, text messages, multimedia content and even erased images, videos and files,” he said enthusiastically. He also tracks the frequencies used to detonate IEDs remotely—a life-or-death calculation as it allows signal jammers to be set correctly and prevent bombs being triggered near ISAF vehicles.

Although the specialists employ the latest high-tech equipment to fight against the IED threat, they face a difficult challenge as insurgents constantly reinvent their fatal designs. “They adapt, they are clever; they manage to combine techniques. And on the Internet, you will find many of the plans,” said the adjutant.

One recent graphic example shows the rebels’ ability to come up with deadly new ideas.

“In late February, an American soldier saw an American radio placed on the road,” said Lt. Col. Charles, head of the center. “The soldier recovered the radio, put it in his vehicle, and a few seconds later it exploded, leaving many dead.”

With materials for making IEDs freely available, their use is hard to counter. The devices were responsible for 60 percent of ISAF fatalities in 2009; the figure fell to 42 percent last year.

“You only need two components—an oxidizer and a fuel, such as gasoline or motor oil. It is very easy to do,” said Capt. Julian, a military chemist working in the laboratory. “This is ammonium nitrate gel,” said the captain, pointing to a bottle containing a white jelly recovered after an attack in Kabul.

“It is normally used in quarries instead of dynamite. Everyone knows where it comes from, exactly which company in Pakistan,” he said about the substance, which was banned by President Hamid Karzai to try to thwart bomb production. “But on the border with Pakistan [where the Taliban have bases] the controls are very difficult to enforce.”

IEDs come in all shapes and sizes, using plastic water jugs, steel cookers and pipes, and are placed on roads, footpaths, and in trees. Bigger attacks are designed to rip apart even U.S. armored trucks, while “daisy-chain” links are often used to attack convoys so that one explosion triggers a series of follow-up blasts.

The laboratory in Kabul tries to gather information on the identity of the bomb-makers by carefully gathering fingerprints and DNA traces. The analysts can even lift prints off tape wrapped around a pressure plate by the insurgents.

The tape is placed in a sealed tank in which glue is heated up until it becomes a vapor. This reacts with residue from fingerprints to make them visible, and they can then be sent to a U.S. forensic center for checking.

With most of the NATO force about to depart Afghanistan next year, the future of IED analysis is uncertain, but Charles said that the laboratory had proved its worth many times over: “It has enabled the arrest of … several hundred insurgents; and kept us up to date with new threats.”