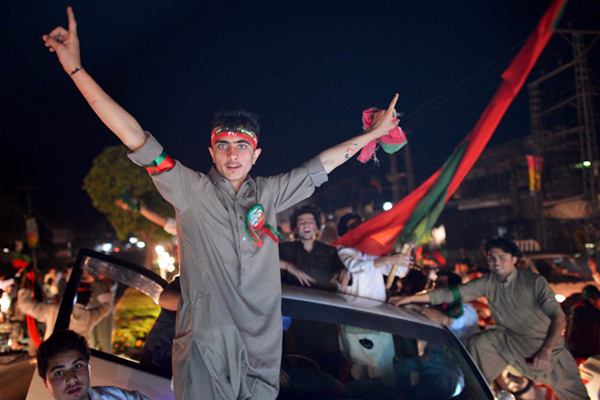 Can the PTI bring peace to the violence-torn province?

Imran Khan’s Pakistan Tehreek-e-Insaf has won power in Khyber-Pakhtunkhwa province, putting to the ultimate test the former cricket star’s anti-U.S. rhetoric and calls for peace talks with the Taliban.

After years of war, displacement, and broken promises from religious parties and the secular Awami National Party, voters on the frontline of the Taliban insurgency rewarded Khan’s untested party with the highest number of seats.

Early results indicate the PTI has secured at least 33 seats in the 99-member provincial assembly. For the PTI, it was a staggering victory in Khyber-Pakhtunkhwa—one of the most troubled parts of the country—and hands Khan an almost poisoned chalice of responsibility.

Bitterly opposed to U.S. drone strikes and Pakistani offensives against Taliban fighters blamed for killing thousands of people, victory in the northwest propels the PTI from the lofty ideals of opposition to the uncomfortable realities of government.

Many analysts believe Khan will have a rude awakening and will realize very quickly that his policies of appeasement are naive, that it is not just “America’s war,” and that the Taliban are not people he can do business with.

“They will wake up to reality very quickly because the stance of the Taliban is such that it is absolutely not reconcilable with any government in [Peshawar] or in the federal capital,” said Saifullah Khan Mahsud of the FATA Research Center.

The ANP, which governed Khyber-Pakhtunkhwa for the last five years, was all but wiped out at the polls, sent packing by an electorate fed up with corruption and their inability to bring peace to the war-racked province. Khan, on the other hand, presented himself as a charismatic leader. He visited repeatedly, talking with and walking among ordinary people. He promised peace and denounced the U.S. drone strikes—it proved a heady combination.

The Taliban, who denounce democracy as “un-Islamic,” killed more than 150 people during the election campaign, including 24 on polling day itself. Liberal parties in the outgoing government suffered by far the heaviest losses.

Taliban spokesman Ihsanullah Ihsan said the insurgents would first “wait till political parties form their government in center and Khyber-Pakhtunkhwa” before announcing their policy. But referring to PTI and the Pakistan Muslim League (Nawaz), which won the national polls, before the elections he also warned that: “If they also come into conflict with Islam, then we will decide to target them.”

One crucial aspect will be the relationship between the PTI in Peshawar and Nawaz Sharif’s government in Islamabad. Both leaders voiced similar positions on the war on terror though Sharif is seen as a pragmatist. But even if a decision is taken to reach out to the Taliban to initiate a peace deal, similar policies of talks have unraveled in recent years.

“He wants peace without fighting the war. We could well see another peace deal, and after a few months of Taliban misrule and injustice, public opinion would once more sour,” said Shaukat Qadir, a retired brigadier and security analyst.

But much will likely depend on Pakistan’s powerful military. Army chief, Gen. Ashfaq Kayani, has been a strong U.S. ally but junior ranks are increasingly fed up with the bloody war and opposed to American intervention.

“It is a very tricky situation because on the one hand the Army chief mentioned recently that political forces and the military should be on the same page and there is no compromise with those forces which they are fighting,” says retired general Talat Masood.