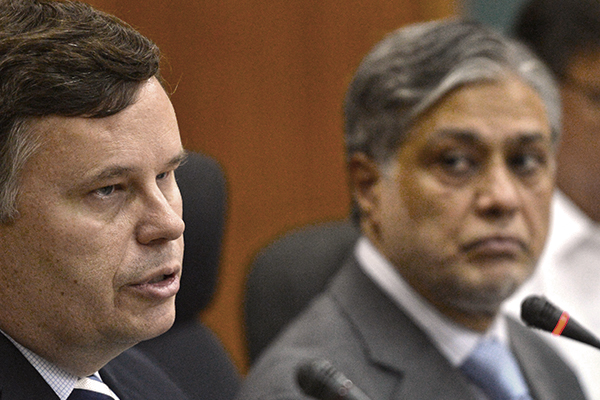 A new IMF report reviewing Pakistan’s economic performance reconfirmed the growth forecast of 3.1 percent for the current financial year, which ends June 30. This figure was revised up from an earlier IMF assessment of 2.8 percent. But actual growth could be higher still.

“That 3.1 percent may still be a bit on the conservative side,” Jeffrey Franks, the IMF mission chief for Pakistan, told reporters on a conference call Friday. “So we see indicators of growth that are relatively strong considering the fiscal adjustment that has taken place.”

Earlier this week, the IMF released a tranche of $555.6 million as part of its $6.7-billion support program for Pakistan. The State Bank of Pakistan today confirmed receipt of this disbursement, which raises the country’s foreign-exchange reserves to $9.1 billion.

The IMF says Pakistan’s growth pace has been boosted by the manufacturing sector and comes despite weaknesses in agriculture. It notes that Islamabad faces “strong” political resistance to IMF-prescribed structural reforms, including for the energy sector and tax collection.

The report also cautions that Pakistan still has tight foreign-exchange reserves and security challenges: “Security conditions in Pakistan remain difficult with significant terrorist activity, as well as sectarian violence and urban criminal activity, which could depress investment and growth.” The report was prepared after the IMF team met the Pakistani finance minister, Sen. Ishaq Dar, and his team in Dubai last month. The meeting was held outside Pakistan because of security worries, said the IMF.

The Washington-based lender also points to rising inflation. “Inflation is projected to hover around 10 percent in the remainder of this fiscal year before easing to around 5 to 7 percent in future years,” it says.

The IMF forecast for the next fiscal year, which starts June 1, is “about 3.7 percent.” The report also says Pakistani economic growth “will continue to accelerate in the medium term.”