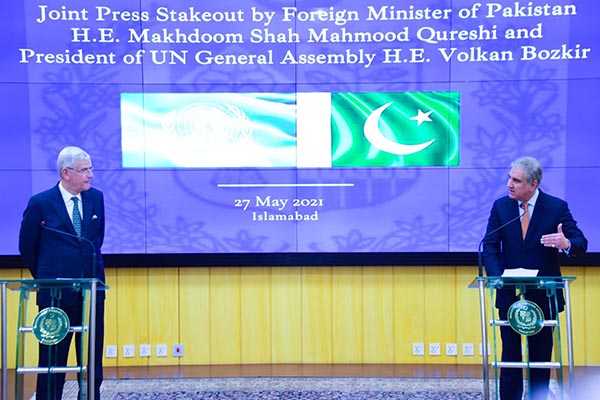 During visit to Islamabad, Volkan Bozkir urges Pakistan and India to work toward resolving Kashmir dispute

The United Nations Security Council (UNSC)’s inaction on Palestine is hurting its credibility, United Nations General Assembly President Volkan Bozkir said on Thursday during an address at the National Defense University in Islamabad.

“Inaction on the issue of Palestine, which is a grave matter, is damaging the credibility of the United Nations and the Security Council,” he said, adding he hoped the Security Council would soon unanimously take action on this important and necessary issue. “Hundreds of Palestinians have been killed in blatant human rights abuses,” he said. “Negotiations are urgently needed to establish two independent states. The U.N. General Assembly will not sit idly until peace is restored in the Middle East,” he added.

Referring to the Kashmir conflict between Pakistan and India, he said he was well aware how the average Pakistani citizen felt about the issue. “I have always urged the parties to refrain from changing the status of the disputed territory. I urge India and Pakistan to work for a peaceful solution to this problem,” he said, and stressed that peace, stability and prosperity were only possible through normalization of ties between Pakistan and India after resolving the Jammu and Kashmir dispute.

The UNGA president, who is in Pakistan on a three-day visit on the invitation of Foreign Minister Shah Mehmood Qureshi, also addressed the ongoing coronavirus pandemic and emphasized that vaccines should be available to both rich and poor nations without bias. He also praised Islamabad’s coronavirus strategy, saying it was showing results.

On the ongoing Afghanistan peace process, Bozkir said that peace in the war-torn states was essential for regional stability. “The Afghan peace process should be Afghan-owned and Afghan-led,” he said and appreciated Pakistan’s role in it.

The visiting dignitary also met Prime Minister Imran Khan, according to the Prime Minister’s Office, and discussed a wide range of issues pertaining to regional and international peace and security, sustainable development, and economic recovery efforts in the wake of the COVID-19 pandemic.

The two leaders exchanged views on key items on the U.N. agenda, including Palestine, the Jammu and Kashmir dispute, the Afghan peace process, and illicit financial flows from proceeds of crime, corruption, and bribery, it added.

The prime minister, read a statement, lauded Bozkir’s role in convening a special meeting of the General Assembly on Palestine, stressing that steps should now be taken to revive the peace process and ensure a just and lasting solution in line with relevant U.N. resolutions and two-state vision. Khan also underscored Pakistan’s commitment to multilateralism with the U.N. playing a central role. He highlighted the need for enhanced international cooperation, under the U.N. auspices, to address climate change and environmental degradation, as well as debt relief to support the developing countries’ economic recovery efforts and attainment of SDGs by the target date of 2030.

The U.N. president briefed the prime minister on various initiatives undertaken during his leadership of the General Assembly to address key international political and socio-economic issues.

Bozkir is the first Turkish national to preside over the U.N. General Assembly. He is a former diplomat and a senior politician.