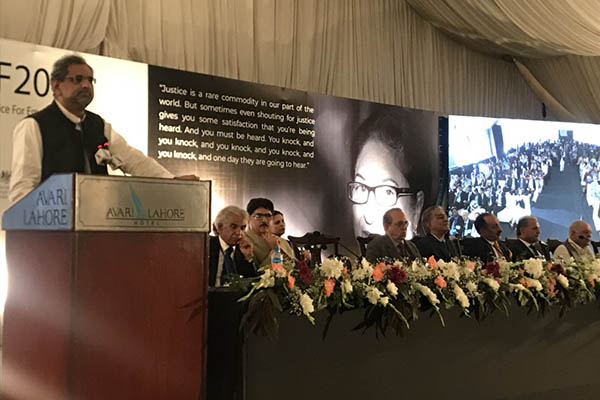 Senior lawmakers, judges, civil rights activists, diplomats and journalists over the weekend paid homage to Asma Jahangir at a conference in Lahore, recognizing the activist and lawyer for her fearless defense of human rights and unceasing devotion to ensuring justice for society’s downtrodden—often at the expense of her own safety and wellbeing.

The inaugural Asma Jahangir Conference, organized at Lahore’s Avari Hotel from Oct. 13-14, 2018, focused on the same issues that had been close to the deceased activist’s heart: human rights, access to justice, and empowerment of the masses. It is a testament to Jahangir’s memory that every major political party—from the Pakistan Tehreek-e-Insaf to the Pakistan Muslim League (Nawaz) and the Pakistan Peoples Party—was represented in honoring her and her many causes.

Supreme Court of Pakistan Chief Justice Saqib Nisar took the stage on Saturday to recall how Jahangir had taught him the importance of human rights, adding that her teachings had prompted him to take suo motu notice of matters relating to public welfare. “Without her,” he said, “We would not have been able to achieve the standard of human rights we currently have. Lawyers in Pakistan have been ahead of their Indian counterparts in fighting for human rights because of Asma.” Similarly, Lahore High Court Chief Justice Yawar Ali said Jahangir had been a remarkable human being who had always raised her voice against tyranny. “We will take her mission forward,” he said.

The European Union’s Ambassador to Pakistan, Jean-Francois Cautain, said Jahangir had been a true human rights defender and supporter of international fundamental rights that are central to the European Union. “I agree with her that human rights is not a job, it’s a conviction. And I also add that it is a passion,” he told a packed audience.

Recalling how Jahangir had been an inspiration to the downtrodden, Afghan activist Orzala Nemat said she had become a lawyer after watching the activist and realizing she could fight for her own and others’ rights. Former secretary general of the Human Rights Commission of Pakistan, and close personal friend of Jahangir I.A. Rehman also said she had always held the conviction that everyone, regardless of caste or creed, was entitled to equal treatment and kindness.

Former prime minister Shahid Khaqan Abbasi also addressed the conference, noting that selective accountability of public figures must end. He said politicians who misused public funds should be taken to task, but discriminating against them exclusively was detrimental to the democratic process. “Asma Jahangir became the voice and the conscience of the people of Pakistan,” he said, “When Asma became silent, the nation became silent.”

The first day of the conference also included panels on freedom of expression and mainstreaming gender. Journalists from across the world noted that self-censorship of media organizations was the biggest problem facing journalism today and lamented the number of journalists who had been killed or threatened in the recent past. Closing the day’s proceedings, Adviser to UNDP on Human Rights Ali Dayan Hasan read out resolutions demanding self-censorship in Pakistan end and Article 19A of the Constitution reviewed to prevent the selective application of freedom of expression.

In the panel on empowering women in the criminal justice system, speakers noted that none of the 39 women-specific laws were sufficiently implemented, pushing women in Pakistan to the sidelines. The first day of the conference ended with resolutions demanding limits on suo motu powers; a review of family laws; greater emphasis on including women in the workforce; a review of data protection laws; and training for lawyers and judges on cyber law.

The second day of the Asma Jahangir Conference continued the themes of the previous day, with an emphasis on fundamental rights and justice for all.

Representatives of political parties, including PPP Chairman Bilawal Bhutto-Zardari, Federal Minister for Human Rights Dr. Shirin Mazari, former National Assembly speaker Ayaz Sadiq, and the ANP’s Afrasiab Khattak and Bushra Gohar were some of the major speakers to address the final day of the inaugural conference.

Bhutto-Zardari, in his address, hailed Jahangir as an inspiration to pro-democratic forces. “She fought cases from bonded labor to victims of religious prosecutions. No fight was too big for Asma, so no case was tough for her.” The leader of the PPP said that Jahangir’s ideals would never go out of style and urged the current PTI-led government to focus on ending inequality as advocated by Jahangir. Human rights minister Mazari said that despite ideological differences, Jahangir and her had always been friends. “I knew Asma since my school days and she had been an inspiration for me since then,” she added.

In a number of resolutions passed throughout the day, the conference backed the promulgation of refugee laws; better investigative practices in criminal cases; implementation of visa-free policies to expand solidarity among South Asian nations; implementation of the Transgender Act, 2018; and a greater focus on ensuring equal rights for women under the law.