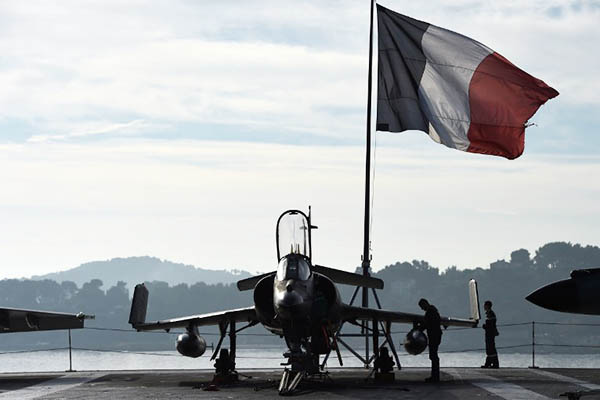 The spate of Islamic State terror attacks has brought France and Russia together and raised hopes of a united political effort to resolve the Syria conflict, but experts question the logic of more airstrikes.

In the wake of the brutal attacks in France and the downing of a Russian passenger jet over Egypt last month, Paris and Moscow are now keen to present themselves as partners—a potentially major turnaround after nearly two years of deteriorating relations over the Ukraine crisis.

Hollande has called for the “bringing together of all those who can realistically fight against this terrorist army in a large and unique coalition,” while President Vladimir Putin ordered his navy in the Mediterranean to establish contact with its French counterparts and work together “as allies.”

“In a certain way, Putin has succeeded in bringing the international community back together, after being banished from it,” said Michel Goya, a military historian at the Institute for Political Studies in Paris.

France has already launched fresh strikes against the city of Raqa, the Syrian stronghold of I.S., in retaliation for Friday’s attacks in Paris. A senior French official told AFP the bloodshed in Paris would spur an international effort that “strikes more intelligently together against Daesh, to hurt Daesh by striking more damaging targets, particularly against financial resources.”

He said there would be a focus on oil infrastructure and transport routes that are key to I.S. funding. But striking economic targets could drive more locals into the arms of the jihadists, warned analyst Hassan Hassan, while doing little to significantly degrade the group’s capabilities. “Raising the stakes will worsen the situation,” said Hassan, author of ISIS: Inside the Army of Terror. “People depend on oil for their basic livelihoods. If you deprive them of that, it forces them either to flee and become refugees, or join I.S., as they need a source of income,” he said.

“The French want to show their citizens they are powerful, but I assume if they suddenly have these new targets to strike, it’s because the Americans didn’t want to hit them because they are in residential areas, or they are problematic in some way,” said Hassan.

In any case, France’s seven waves of strikes in Syria are a “drop in the ocean” compared to the 2,500 launched by the U.S., said historian Michel Goya. “For the strikes to be more effective, they must engage combat helicopters, attack aircraft, even light infantry and special forces,” said Goya.

There is little likelihood of France putting boots on the ground without U.S. support, which was again ruled out by President Barack Obama this week. “We play into the [I.S.] narrative when we act as if they are a state and we use routine military tactics that are designed to fight a state,” Obama told reporters in Turkey.

A senior French official said the Egypt plane bombing had caused a “fundamental change” in the Russian approach, with Moscow now actually targeting I.S. rather than the more moderate rebels that have borne the brunt of its airstrikes in the past two months.

There is also a new determination to resolve the broader Syrian conflict and get key players around the table.

“The optimistic hope is that all parties will take a less hardline position and embrace the possibility of compromise, though the question of Assad will remain the key hurdle,” said Julien Barnes-Dacey, a Middle East expert for the European Council on Foreign Relations.

Although U.S. Secretary of State John Kerry said Tuesday that Syria could be weeks away from a “big transition,” the question of Assad’s fate still sharply divides the international community.

When Hollande met Putin in October, the removal of Assad from power was a strict pre-condition for working together, and the senior French official told AFP that position had not changed after Friday’s attacks. But Russian Foreign Minister Sergei Lavrov reiterated on Wednesday that there could be no “pre-conditions for joining forces in the fight against terror.”

Beyond the big-picture diplomacy, experts say a crucial factor is winning the trust of Sunni Muslims, who acquiesce to I.S. rule partly from fear of other militias in the region. “The Sunni Arab population is encircled, hit from all sides, oppressed by the regimes in Baghdad and Damascus,” said Goya. “What do we do for the Sunni Arab population? That’s the fundamental question.”