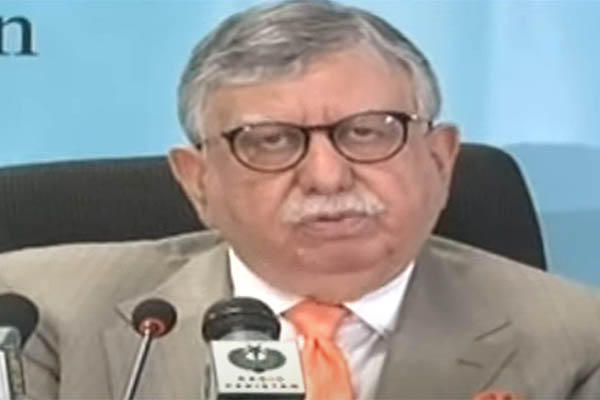 Finance Minister Shaukat Tarin on Thursday regretted that inflation continues to impact the common man, stressing that because Pakistan had become a “net importer” of essential commodities, the only solution was to increase local production.

Addressing a pre-budget press conference in Islamabad during which the Pakistan Economic Survey 2020-21—an annual report on the performance of the economy—was unveiled, he said that inflation was a core concern of the incumbent government. “The way to solve this is by increasing production and that is why we have focused on agriculture in this budget,” he said, adding that imports—especially of wheat and sugar—were on the rise.

Crediting Prime Minister Imran Khan for evolving a pandemic response strategy that resulted in rapid stabilization of Pakistan’s economy after the contractions experienced last year, the minister said initiatives like the “smart lockdowns” had improved growth. “The government had set a GDP growth target of 2.1 percent for itself,” he recalled. “The decisions of this government, such as incentivizing manufacturing and textiles, construction, and interventions in agriculture, have helped the economy recover,” he added.

Referring to the provisional GDP growth of 3.94 percent during the outgoing fiscal year, he said this was a result of rebound in almost all sectors. Summarizing the past fiscal, he said the agriculture sector had grown by around 2.8 percent; industrial by 3.6 percent against a target of 0.1 percent; and services by 4.4 percent against a target of 2.6 percent. Tarin especially praised large-scale manufacturing, saying it had grown by 9 percent and played an important role in helping overall growth.

The finance minister reiterated that he had told the prime minister and the federal cabinet that the focus on stabilization must end. The country needs to focus on sustainable growth “until we go to 5-8 percent GDP growth,” he said. “The poor man has been crushed in this stabilization phase because the dreams we have shown them have been that of a trickledown economy. And this can only happen when growth is sustainable and continuous for 20-30 years,” he said, adding that the only way forward was sustainable growth. “Every time we grow by borrowing money, which is credit-based growth,” he lamented, pointing to previous cycles of booms and busts that have marked the national economy.

Referring to the impact of the pandemic, he said that 55 million people had lost their jobs last year but 52.5 million had secured new employment later in the year. “So we still have 2.5 million people who have not regained their employment,” he said. However, he noted, the economy was recovering and this number would also be reduced.

The finance minister praised remittances by overseas Pakistanis, reminding journalists that they had crossed $26 billion in the outgoing fiscal. Addressing criticism that the incumbent government was increasing debt, he said this was “inevitable” due to the fiscal deficit. “The total debt has only increased by Rs. 1.7 trillion from 2020-21,” he said, claiming this was a “nominal” increase compared to previous years.

On Pakistan’s persistent energy challenges, Tarin repeated the government’s claims of overcapacity, saying that it was not possible for the country to utilize the available capacity even if it witnessed growth of 4-6 percent over the next few years. Vowing not to increase tariffs to recover the capacity charges, as it would boost inflation, he claimed the government would undertake “innovative” solutions to eliminate circular debt within 7-8 years.

The finance minister repeatedly stressed the need to private state-owned enterprises, saying the government hoped to sell distribution companies at a profit to private enterprises. Claiming that previous governments had resisted privatization because it reduced their authority, he admitted that it was fair to question why he felt that he could achieve this goal when so many others had failed in the past. He claimed that he had played a key role in privatizing the Habib Bank and had “experience” that could be used to private loss-making enterprises.

Tarin also praised the country’s I.T. sector, noting it had registered growth of 40 percent in the past year. He vowed to double it over the next year. “India, in 2010, earned $1 billion through I.T. exports. Today, they are earning $100 billion through them. If they can grow 100 times, why can’t we grow our I.T. industry by 40 or 50 times?” he said.

The lawmaker said the country would talk to China and urge it to stop outsourcing jobs to its citizens, adding that feedback had been sought from Chinese manufacturers to learn the kinds of facilities they required to invest in Pakistan’s Special Economic Zones. “We also want to earn dollars,” he said, adding that this required increasing non-traditional exports and inviting direct investment.

On his plans for taxation, Tarin reiterated his desire to end the Federal Board of Revenue’s harassment of taxpayers. “FBR will not audit [businesses or persons]. A third-party audit will be conducted,” he said, adding that if the audit found malfeasance of any party, the government would act against them.

To a question, the minister said Pakistan’s negotiations with the International Monetary Fund on its requirements to continue an Extended Fund Facility were ongoing. He said both the global lender and the Pakistan government wanted the same thing: sustainable growth. However, he cautioned, the kinds of taxes and tariffs the IMF wanted to increase would disproportionately impact the poor and salaried class. “This is a red line for the prime minister,” he claimed. “We will not further burden the poor,” he added.