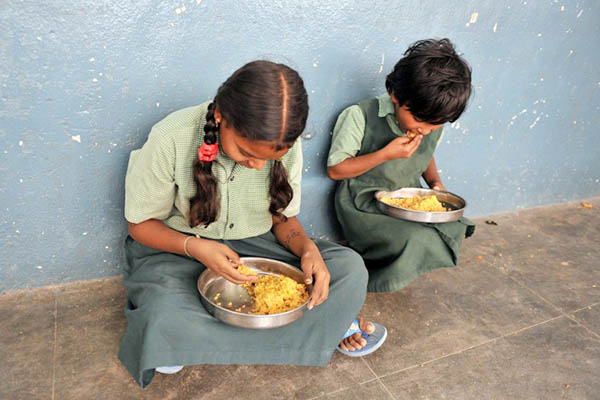 An Indian government initiative to tackle malnutrition by providing millions of school children with free lunch could be jeopardized if students are forced to obtain an identity card to get their meal, activists said on Tuesday.

India has been providing lunch to roughly 120 million children enrolled in government schools for nearly two decades, in what is one of the world’s largest state-run food programs. But from June 30 students will need a biometric ID card to receive their rice and pulses—despite estimates that 200 million Indian children are not yet registered on the database.

The government says it wants to streamline its lunchtime delivery system but the move has puzzled those who thought the scheme was succeeding in keeping children in school and well fed. “Instead of improving the delivery system it will actually create a barrier for children to access meals,” Dipa Sinha, who campaigns for a food rights charity, told AFP. “The beneficiaries are bona fide students and every single meal is accounted for. There is no pilferage and all we need is to improve the quality, not exclusion.”

India spends nearly $2 billion a year on the scheme, which has a particular focus in rural areas where malnutrition rates are highest. A global index last year ranked India the 22nd ‘most hungry’ nation in the world, with the World Bank estimating it has the highest levels of childhood malnutrition, outstripping Sub-Saharan Africa.

In a bid to weed out welfare cheats, the government has made it mandatory to produce unique biometric identity cards to receive cash benefits from dozens of state schemes.

The Supreme Court declared in 2014 that possessing such a card was voluntary, but the case is ongoing. More than one billion Indians are already registered on a national database that records fingerprints and iris signatures to generate a 12-digit ID number for each citizen.

The mass collection of personal information—the largest database of its kind anywhere in the world—has proved controversial, with critics saying it forces citizens into signing up. “They have taken it to a level where either you obey and enroll or you don’t exist,” said Usha Ramnathan from the Center for the Study of Developing Societies.