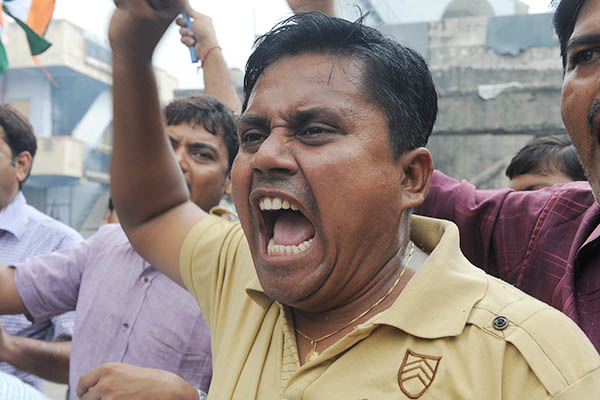 A demonstrator shouts anti-Pakistan slogans at a rally in India. Sam Panthanky—AFP

India’s army accused Pakistan on Tuesday of firing across the de facto border that divides Kashmir, in the latest confrontation fuelling tensions between the nuclear-armed rivals.

The army said Pakistani soldiers had violated the ceasefire overnight along the heavily militarized Line of Control (LoC) in the disputed Himalayan region.

It said in a statement that Pakistani soldiers started firing at Indian posts in Mendhar district late on Monday and about an hour later in the Balakot area of Poonch sector, with the firing continuing until about 6 a.m.

Tensions have flared in the Kashmir valley since the ambush and killing last week of five Indian soldiers in the Poonch sector, which India blamed on the Pakistan Army. The ambush sparked a series of cross-border skirmishes, which the rival neighbors blamed on each other.

Pakistan accused India of killing a civilian during firing on Monday and summoned its envoy in Islamabad to register a protest.

Last week’s ambush was the deadliest such incident along the LoC since the two countries agreed to a ceasefire in 2003. Pakistan denied its soldiers were involved in the attack.

Indian Defense Minister A. K. Antony last week hinted at stronger military action along the LoC in the wake of the ambush. In comments on Monday, Antony said: “The armed forces have the freedom to respond to a developing situation there (along the LoC) appropriately.”

Pakistani Prime Minister Nawaz Sharif has been vocal in his desire for better relations with India since his election in May, but the recent flare-ups have tested the resolve for peace on both sides.

The picturesque Himalayan territory is divided between India and Pakistan by the U.N.-monitored LoC, but both countries claim it in full. A dozen militant groups have also been fighting Indian forces since 1989 for the independence of the disputed territory or for its merger with Pakistan. Although violence has abated during the last decade, the fighting has left tens of thousands of people, mostly civilians, dead.

What can one say after looking at this face?