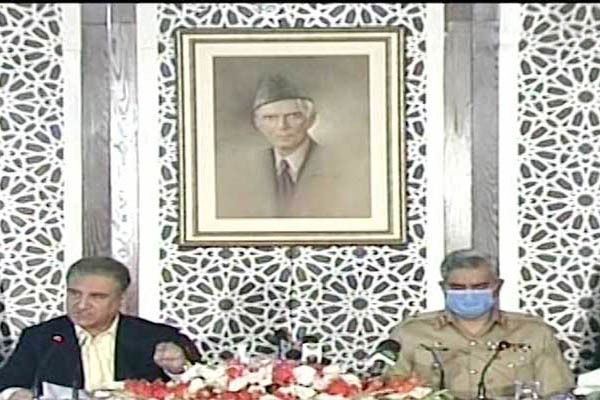 Calling on the international community to play its role for peace and stability in South Asia, Foreign Minister Shah Mehmood Qureshi on Saturday said that Islamabad knew how to defend its soil and would not allow Delhi to continue its efforts to foment terrorism inside Pakistan.

“The evidences provided by Pakistan provide concrete proof of Indian financial and material sponsorship of multiple terrorist organizations, including U.N.-designated terrorist organizations Jamaatul Ahrar, the Balochistan Liberation Army and Tehreek-e-Taliban Pakistan,” Qureshi told a press conference in Islamabad. “We expect the international community to play its role for peace and stability in the region by (a) compelling India to immediately halt its state sponsorship of terrorism in Pakistan (b) Bring to justice all those involved in financing and supporting terrorism inside Pakistan according to relevant domestic and international laws,” he added.

The foreign minister noted that Pakistan had shared its concerns with major international partners before but this was the first time it was publicly presenting “irrefutable evidence to the world” to demonstrate India’s sponsorship of terrorism in Pakistan.

“The international community can no longer turn a blind eye to this rogue behavior by a state that refuses to adhere to international laws and U.N. conventions,” he said, stressing that India is a “state sponsor of terrorism that is consistently exhibiting rogue behavior.” He said that if the world continued to ignore the Indian agenda to destabilize and undermine Pakistan, it sent a message of apathy for a peaceful and stable nuclear South Asia.

“Our valiant law enforcement and security agencies have resiliently fought and won the war against terrorism. We know how to defend ourselves,” said Qureshi. “India’s efforts to foment terrorism inside Pakistan will not be allowed to undermine Pakistan’s stability in any way. Whether they acknowledge or not, all major powers know India is a threat to the entire region. Now, they must act to prevent it from continuing its sponsorship of terrorism against Pakistan,” he added.

Earlier, the foreign minister noted that as a frontline state in the war against terrorism, Pakistan had paid a heavy price. He said Pakistan had suffered $126 billion in economic losses since the events of 9/11, and been a victim of 19,130 terrorist incidents. “Our sacrifices are acknowledged globally, but perhaps not as much as they should be,” he said.

Presenting the dossier of evidence against India, Qureshi said this was merely a fraction of the proofs Pakistan possessed. He said a recent surge in terrorist incidents in Pakistan proved India’s nefarious designs. He alleged that India’s intelligence agencies Research and Analysis Wing (RAW) and Defense Intelligence Agency (DIA) were financing terrorism in Pakistan and training terrorists to destabilize Pakistan.

The foreign minister claimed India had three primary objectives: (1) to damage Pakistan’s internal peace and stability, which they tried to damage by fomenting sub-nationalist movements inside Gilgit-Baltistan, Balochistan and erstwhile-FATA (2) to prevent Pakistan from achieving economic prosperity, including by attempting to get Islamabad blacklisted at the FATF (3) political instability.

He also alleged that India had formed a “CPEC Cell,” which was answerable directly to Prime Minister Narendra Modi. He said it had been established in 2015 and been allocated $500 million to undermine, delay and disrupt China-Pakistan Economic Corridor projects.

Addressing media, Pakistan Army spokesman Maj. Gen. Babar Iftikhar provided some of the evidence that had been included in the dossier being provided to international powers.

“The recent upsurge in the violence in Pakistan is a direct consequence of India’s intensified engagements with all brands of terrorists, sub-nationalists and dissidents,” he said. He claimed that in November 2018, India had united the Baloch Republican Army, the Baloch Liberation Army, and the Baloch Liberation Front under the umbrella of Baloch Raaji Aajole Sangar. Similarly, he said, in August 2020, TTP, JuA and Harakatul Ansar had been united under the TTP’s umbrella. All these groups, he said, had been united as a single consortium today.

He said a Col. Rajesh, an Indian intelligence officer employed in the Indian consulate in Afghanistan, was engaging with TTP and sub-nationalists to foment terrorism in Quetta, Peshawar and Karachi. “It has also been revealed that Indian intelligence agencies are trying to establish Pakistan’s linkage with ISIS by creating Daesh-e-Pakistan,” he said, adding that 30 Indian ISIS terrorists had been relocated from India to safe havens along the Pakistan-Afghanistan border where they had been placed at the disposal of Daesh commander Sheikh Abdul Rahim.

“RAW made two transactions to promote terrorism in Khyber-Pakhtunkhwa—both were made through Indian banks. $28,000 were transferred through Punjab Bank India, and $55,851 was sent by Indian national Manmeet via New Delhi to Afghanistan International Bank,” he said, adding India had paid $820,000 to TTP leadership through its collaborators.

The Army spokesman said India had raised a militia of 700 people to undertake terrorism in Balochistan. “A commission comprising 24 members was created, which includes 10 RAW operatives. A sum of $60 million was dedicated for this force,” he said, adding that the Indian Embassy regularly paid “handsome amounts” to sub-nationalists under the garb of humanitarian assistance work.

He said confessions of Sarfraz Merchant and Tariq Mir had revealed that $3.23 million had been paid to MQM founder Altaf Hussain by RAW through two Indian companies.

“India has also been rendering support to various entities through provision of weapons, ammunition and improvised explosive devices,” he said, saying a RAW-sponsored network of 6 terrorists had recently been unearthed with linkages to an attack on the Pakistan Stock Exchange in June 2020.

He said RAW agents had been involved in motivating the tribals in Khyber-Pakhtunkhwa to send fighters in Afghanistan for training. Revealing a map, he said that India was managing 66 base camps in Afghanistan and 21 in India to harbor, train and launch terrorists against Pakistan.

“A former Indian ambassador and an Indian Army general visited a Baloch militant training camp in Haji Gak,” he said, citing a letter in Dari. “The camp housed 150 militants.” He alleged India had also paid $30 million to establish a camp in Kandahar to house Baloch militants, adding that weapons and ammunition were supplied via helicopter.

The ISPR chief also alleged that RAW had planned the attack on PC Gwadar, providing $500,000 for it. He also played an audio clip of one Dr. Allah Nazar being provided attack instructions by a RAW handler.

He said a RAW sleeper cell had also been discovered in Karachi, adding that 13 members of it had been apprehended. Main accused Mehmood Siddiqui is an absconder and is residing in India, he added. Detailing other attacks, he also played an audio clip of an Indian handler training terrorists in Pakistan-administered Kashmir on how to use IEDs.

In Gilgit-Baltistan, the ISPR DG said India had long been planning trying to foment unrest there. He said RAW was planning to subvert attempts to grant provisional provincial status to the region, adding that plans called for dissidents to be mobilized after Nov. 20.

“It is India that needs to be scrutinized by the FATF in light of the evidence provided by Pakistan as well as recent revelations of FinCen of India’s terror financing,” he said. “Once again, I would reiterate, about what happened on the Line of Control yesterday,” he said. “It is a serious escalation and unfortunately, India has once again targeted civilians living in Azad Jammu and Kashmir,” he said. “We have given them a very befitting reply.”