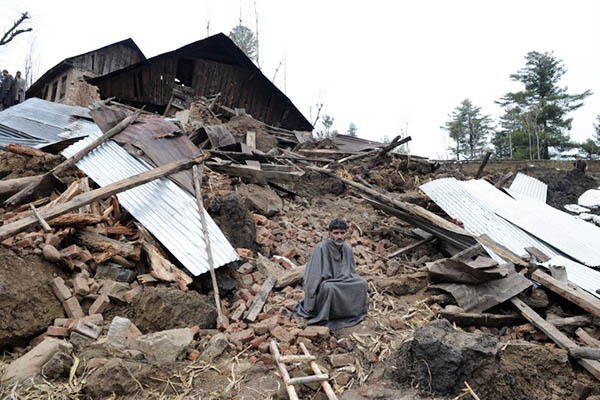 Emergency workers in India-administered Kashmir have recovered 15 bodies including that of a three-week-old baby after a landslide triggered by heavy rains buried several houses.

The baby was found in his mother’s lap under tons of mud, police said Tuesday, as the grim task of searching for bodies continued. The victims all belonged to two families who, after the rains, had moved into what they thought were the stronger of two houses in Ladden village.

“We have recovered 15 bodies. Efforts are on to find a missing boy who was also in the house,”said local superintendent of police Fayaz Ahmed Lone. He said a sole survivor of the landslide had refused to leave his house, and was now “so shocked that he is not able to talk.”

Monday’s landslide hit as authorities issued a flood warning for Kashmir after the River Jhelum, which runs through Srinagar, rose above the danger level.

Homes in Srinagar were flooded for the second time in less than a year, and one man was washed away when he tried to cross a flash flood in his car elsewhere in the state. With more rain forecast in the next three days, authorities said the danger was not over.

The state’s top official Gazanfar Hussain said the river level was falling in most parts of the region but lakes downstream were already full, posing a possible flood danger.

Memories are still fresh of the devastating floods that hit Kashmir last September, killing hundreds. Tens of thousands of people were left stranded when floods and landslides triggered by heavy monsoon rains devastated parts of the Indian-administered section of Kashmir and Pakistan’s neighboring Punjab province.

On the Indian side of the border alone, the floods killed around 300 people, left thousands more homeless and destroyed property and infrastructure worth an estimated $16 billion. Some Srinagar residents have accused authorities of not doing enough to prevent a repeat of that disaster, which many said was exacerbated by the state government’s failure to prepare for flooding.

On Tuesday police said a special team set up to deal with the floods had received 30,000 calls and messages, while plans had been put in place to evacuate people from Srinagar. Relief camps have been set up in the city, which was severely hit by the 2014 flood disaster.

Many shops remained shut in Srinagar on Tuesday, while traders in the main commercial district had moved their goods to safer places.

The latest floods have largely spared Pakistan. Akram Sohail, chairman of the Disaster Management Authority in Pakistan-administered Kashmir, said it had issued warnings not to get too close to the river. “We have also issued an alert for a further rise in water level because of heavy rains and flooding on the Indian side,” he said.