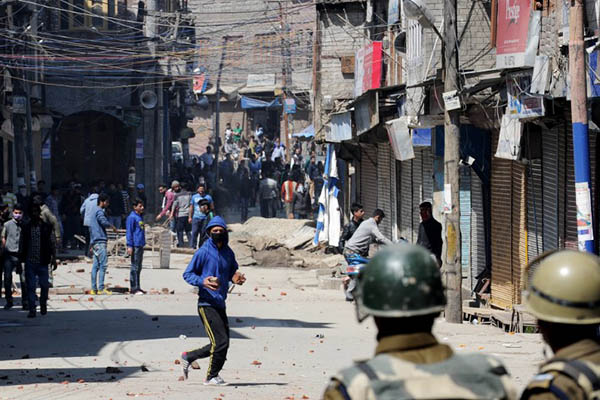 India-administered Kashmir’s main city of Srinagar shut down Saturday in protest against a government plan to resettle Kashmiri Hindus in separate townships after they fled the region more than two decades ago.

Streets were deserted, shops and business establishments remained closed and traffic was thin on the roads in the capital city and other towns across the restive Muslim-majority Kashmir valley.

Tens of thousands of Kashmiri Hindus—known as Pandits—fled to Hindu-dominated areas of the disputed region and other parts of India in the wake of an armed insurgency against New Delhi’s rule in 1990. Earlier this week, the state’s chief minister, Mufti Mohammad Sayeed, announced the local government would acquire land to create “composite townships” for the Pandits.

The move, announced after Sayeed met federal Home Minister Rajnath Singh, sparked tension in the region with separatists opposed to Indian rule comparing it with Israel’s policy of building settlements in occupied territory.

Hostility between minority Hindus and Muslims runs deep in divided Kashmir, leading to frequent confrontations between the two communities. On Friday, protesters clashed with police in Srinagar demanding the townships decision be repealed.

Sayeed has sought to dispel fears about the proposed settlements, telling lawmakers: “We won’t set-up Israeli-type clusters for Pandits and neither Kashmiri Pandits desire to live in such clusters.”

Mohammad Yasin Malik, a top separatist leader who heads the pro-independence Jammu Kashmir Liberation Front, rejected Sayeed’s clarification, saying the settlements would only add to hatred and mistrust between people.

Kashmir has been divided between India and Pakistan since the two countries won independence from Britain in 1947. Both claim the territory in its entirety.

Several rebel groups have been fighting Indian forces since 1989 for independence or a merger of the territory with Pakistan. The fighting has left tens of thousands dead—mostly civilians, including 209 Pandits, according to government records.

Syed Salahuddin, a rebel commander who heads a conglomerate of about a dozen militant groups, warned the government plans would have a “dangerous fallout.” The militant leadership “will not allow it to succeed,” Salahuddin said in a statement from Muzaffarabad, the capital of Pakistan-administered Kashmir, where he is based.

Pandits have also opposed the plan. “This is a gimmick. It is not possible and it cannot succeed,” said Kumar Wanchoo, a Pandit businessman who lives in Srinagar.