India-administered Kashmir Shuts Down Over Killings 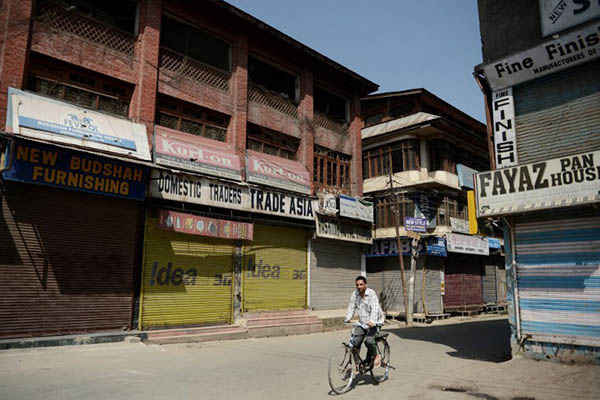 India-administered Kashmir largely shut down Wednesday after separatists called a strike in protest at the killing of three men whose bullet-riddled bodies were discovered in an orchard two days earlier.

Police say the deceased were local militants who were killed due to rivalry between different rebel factions in the conflict-stricken region, but separatist leaders say they died in police custody.

Shops and schools were closed and university exams cancelled as workers went on strike Wednesday, while hundreds of police and paramilitary troops patrolled the main city of Srinagar and other major towns. Separatist leaders opposed to Indian rule were detained by police or confined to their homes to prevent them from leading demonstrations.

“We are investigating the killings, but it seems these are a result of group rivalry among the militants,” said K. Rajendra, director general of police for India-administered Kashmir.

On Monday, villagers at Dangerpora discovered the bodies of the three men in their early twenties with multiple bullet wounds and apparent torture marks. Police later identified them as local militants who had joined a splinter faction of Kashmir’s largest rebel group, Hizbul Mujahideen, months earlier—a claim denied by the group.

“This outfit does not exist. The trio were active members of the Hizbul Mujahideen and were killed in custody,” the group’s top commander Syed Sallahudin said in a statement published in local newspapers Tuesday.

Kashmir has been divided between India and Pakistan since the end of British colonial rule in 1947, with both countries administering the territory in part but claiming it in full.

Hizbul Mujahideen along with several other rebel groups has battled for decades against Indian forces, seeking either independence or merger with Pakistan. The conflict has left tens of thousands dead, mostly civilians.

U.K. Minister Dismisses Allegations of ‘Outside Interference’ in...