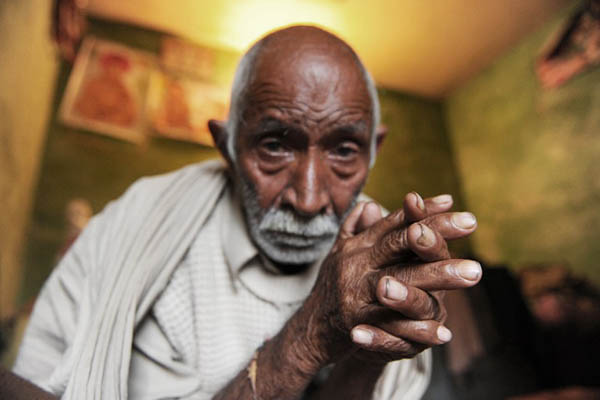 Hindus who migrated to Kashmir from Pakistan during Partition are still awaiting full rights as citizens.

Seven decades after fleeing the carnage of Partition, Mangu Ram is still regarded as a second-class citizen in India-administered Kashmir, unable to own property or vote in state elections. But, now aged 82, Ram is daring to hope he will finally be able to shed his refugee status after Prime Minister Narendra Modi’s Hindu nationalist party won a share of power in India’s only Muslim-majority state.

“If something can be done, then maybe I will finally have some enjoyment in this life,” says the traditional healer, speaking in a slum home on the outskirts of Jammu, Kashmir’s winter capital. “If only the gods could show us some mercy.”

A Hindu, Ram was born in pre-independence India in an area of Punjab province that became part of Pakistan. Hundreds of thousands of families fled across both sides of the border during the 1947 Partition of the Subcontinent, when around one million people were killed in communal violence.

Most of those refugees were quickly absorbed in towns and cities of the newly independent nations. However, the fate of the West Pakistan Refugees (WPRs) who decamped to Jammu and Kashmir state became mired in the dispute with Pakistan over the territory, prompting its rulers to hold off granting them residential rights, including the right to buy land or vote in state polls.

Around 100,000 people are classified as WPRs, most living in the Jammu region. Hardly any of them have ever set foot in Pakistan.

Their plight has been effectively ignored by the federal government in Delhi and successive state administrations, citing legal barriers.

But, in its manifesto for December’s state elections, Modi’s Bharatiya Janata Party pledged to normalize the WPRs’ status. Although the BJP came second, they have joined a Kashmir governing coalition for the first time and are expected to champion the WPRs’ cause.

“We have been living here like this for three generations now,” said veteran activist Labha Ram Gandhi. “Granting us state-subject rights is the only way to improve our condition.”

Despite prevailing unrest, Kashmir is one of India’s more prosperous states. The estimated 18,000 WPR families however live in abject poverty, mostly marrying among themselves because of their low economic status.

“I spend whatever money I earn to send my children to school,” said Ramesh Kumar, a part-time driver. “My fear is their fate is going to be the same as mine,” added Kumar, who lives with his wife, two children and mother in a two-room hovel.

The family’s only permanent income is the $100 monthly pension his mother receives after her husband died serving in the army. Like many WPRs, Kumar hopes the BJP’s presence in the state and federal governments will yield a change in fortunes.

As well as the manifesto pledge, hopes of a breakthrough were also raised in January when a committee of lawmakers in the BJP-dominated national parliament recommended the WPRs be granted permanent resident status. But the WPRs have been disappointed by the absence of a similar commitment in the recent agreement signed by the BJP and its regional partner in Kashmir’s coalition. “We were expecting something to happen about our rights after the BJP came into government. We are still hopeful,” said Kumar. “At least our situation is being discussed in the assembly but we expect the BJP and Modi Ji to do more than just improve our livelihoods,” he said.

Observers say the reluctance of successive state governments to grant full rights to the overwhelmingly Hindu WPRs stems from fears of upsetting the demographic balance in India’s only Muslim-majority state, which has special autonomy enshrined in the constitution.

The WPRs, whose families mainly originate from Punjab, have fallen foul of a pre-independence law that only grants citizenship to people born—or descendants of those born—in the old undivided kingdom of Kashmir. The same legislation has allowed around 35,000 Hindus who have fled Pakistan-administered Kashmir since Partition to be granted citizenship.

Kumar says the law is ridiculous. “I was born here [in India]. My roots are here. What else do I and my children need to be citizens of this place?”

As things stand, Kumar’s children cannot be admitted to state-run training colleges or be employed in the state government, although they can work for the federal one.

The WPRs are widely seen as victims of the broader dispute over Kashmir, a captivating Himalayan region between India and Pakistan and claimed in full by both. Successive state governments have ignored requests by their federal counterparts for a “one-time” settlement of the Hindu refugees, fearing a backlash from Muslims whose numbers have fallen six percent since 1947. Kashmir’s Hindu population has risen by five percent in the same period.

The Rashtriya Swayamsawak Sang (RSS), an influential Hindu group whose alumni include Modi, has advocated settling “Hindu patriots” in Kashmir. Separatists opposed to Indian rule insist the WPRs must settle in states where Hindus are in a majority.

Gandhi however said the WPRs’ patience is exhausted and they are ready to take matters into their own hands if their hopes are dashed again. “We will spill our blood on the streets for our rights,” he said.