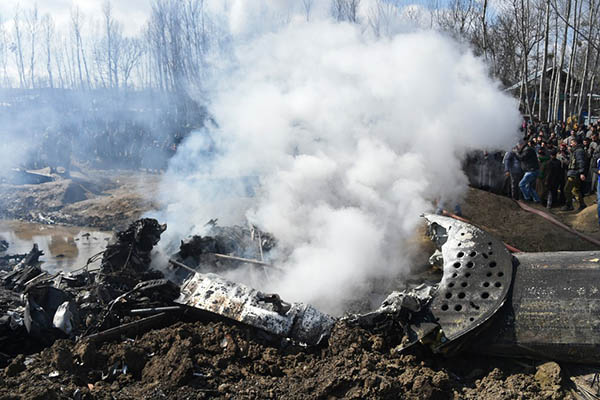 The Indian Air Force confirmed for the first time on Friday that it shot down one of its own helicopters during clashes with Pakistan in February over Kashmir, killing all six on board.

“A court of inquiry was completed and it was our mistake that our missile hit our chopper,” said the head of the Air Force, Air Chief Marshal Rakesh Kumar Bhadauria. “We will ensure such mistakes are not repeated in the future,” he told reporters.

The military helicopter crashed on Feb. 27 as Indian and Pakistani aircraft engaged in dogfights over Kashmir in their most serious military skirmish in years. A day earlier Indian aircraft had bombed what New Delhi called a “terror camp”—but appeared to be an empty field—used by the Jaish-e-Mohammed militant group in the Balakot area of Pakistan. That followed a suicide bombing on Feb. 14 claimed by Jaish-e-Mohammed but perpetrated by a local separatist that killed 40 Indian troops.

The Indian military at the time gave no reason for the helicopter crash although media reports cited unnamed sources as saying it was friendly fire.

Confusion still surrounds how many other aircraft were shot down, with Pakistan saying it downed two Indian fighter jets but India saying it lost only one. India meanwhile said it shot down a Pakistani F-16—an assertion repeated by Bhadauria on Friday—but Pakistan denied this at the time.

Kashmir has been divided between India and Pakistan since 1947 and has been the spark of two wars and several clashes. China also claims a part of the Himalayan region. Tensions have spiked again since India revoked the autonomy of the part of Kashmir that it controls on Aug. 5.