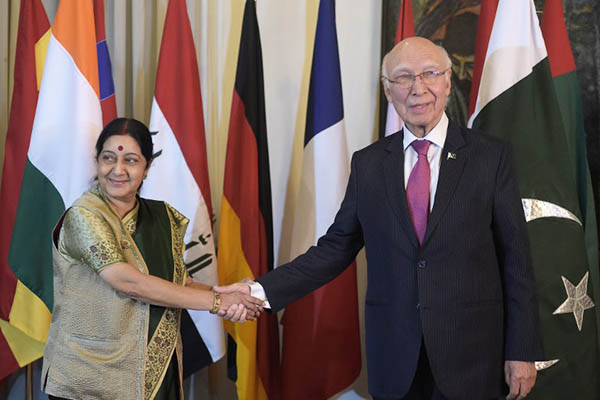 Dialogue process to start ‘from scratch’, according to India’s foreign minister.

India and Pakistan agreed to resume high-level peace talks on Wednesday, according to a joint statement that signaled a thaw in tense relations between the neighbors that have fought three full-scale wars.

The breakthrough came at the close of a regional conference in Islamabad attended by India Foreign Minister Sushma Swaraj, which also saw Afghan President Ashraf Ghani and Pakistan Prime Minister Nawaz Sharif meet in a bid to revive the Taliban peace process.

“Both the countries have agreed to resume the stalled talks,” said Swaraj, who met with Sharif and his foreign affairs adviser Sartaj Aziz. “We will start the dialogue process from scratch,” Swaraj added.

The dialogue will cover peace and security as well as territorial disputes, including over Kashmir, a Himalayan region that has seen India and Pakistan fight two wars since gaining their independence from Britain in 1947. Delhi suspended all talks after Islamist gunmen attacked Mumbai in November 2008, killing 166 people. The countries agreed to resume the peace process in 2011 but tensions have spiked over the past two years, with cross-border shelling over the disputed border in Kashmir claiming dozens of lives since 2014.

A brief meeting between Sharif and his Indian counterpart Narendra Modi on the sidelines of the U.N. climate change summit in Paris on Nov. 30, followed by talks between the two countries’ national security advisers in Bangkok, appeared to have broken the ice.

Pakistani opposition lawmaker Sherry Rehman, a noted foreign policy expert, said the agreement was “important” but expressed disappointment that the dialogue would start from scratch—a demand she said likely came from the Indian side. “The good news is they’ve agreed to resume what they call ‘comprehensive dialogue’ and really all the subjects are the same,” she said.

Rehman said it was unlikely the deal had been made without the approval of Pakistan’s military, which ruled the country for around half its history and is widely seen as setting the country’s foreign and security agenda. “I’m assuming they’ve had a discussion and come to some agreement,” said Rehman.

Neither side, however, mentioned whether a proposed cricket series in December and January would go ahead—an omission that Pakistan’s cricket chief said meant the plan was much less likely to happen.

On Wednesday, Afghan President Ashraf Ghani arrived in Islamabad in an effort to jumpstart peace talks with the resurgent Taliban, as he and Sharif inaugurated the regional Heart of Asia conference.

Sharif welcomed Ghani at the airport in a red-carpet reception with a guard of honor and 21-gun salute, in what was seen as an attempt to thaw frosty ties between the two Muslim neighbors.

Ghani’s visit came as at least 37 people were killed in a Taliban siege at an airport in Kandahar, with analysts noting the “familiar pattern” of the insurgents launching large-scale attacks “whenever there is talk about peace talks.”

Relations between Afghanistan and Pakistan have foundered since the Taliban confirmed in July that its founder Mullah Omar was dead, a revelation that scuppered nascent negotiations between Kabul and the Islamist movement. Ghani subsequently blamed Pakistan for a surge in Taliban attacks inside Afghanistan, accusing Islamabad of sending “messages of war.”

But on Wednesday, both leaders vowed to fight militancy and extremism in the region. Their meeting was seen as a strong signal that they are attempting to revive the Taliban talks, brokered by the Pakistan Army, which has long wielded influence over the insurgent group.

Ghani also met with Pakistan’s military chief Gen. Raheel Sharif, who assured him of the military’s “continued full support,” according to an Army statement. “I strongly reiterate our commitment to a lasting and just peace within which all movements that resort to arms convert themselves to political parties and participate in the political process legitimately,” said Ghani.

Pakistan later said the United States supported the talks, while the foreign minister for regional heavyweight China also backed the process after meeting Ghani, Sharif and a U.S. official at the conference. “The Chinese side… hopes that the Afghan government will overcome difficulties and stick to the peace talks with the Taliban,” Wang Yi was quoted as saying by Chinese state media.