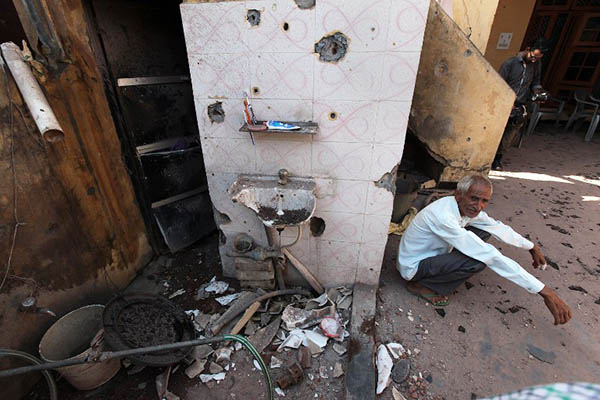 An Indian villager sits in a house damaged by cross-border firing between Indian and Pakistani forces. Rakesh Bakshi—AFP

India told Pakistan on Thursday to stop shelling disputed Kashmir, warning it will make such attacks “unaffordable” for Islamabad as the death toll from this week’s cross-border violence rose to 17.

Defense minister Arun Jaitley accused Pakistan of instigating the tit-for-tat shelling that began on Sunday, forcing tens of thousands on both sides of the border to flee the worst violence there in years. “If Pakistan persists with this adventurism, our forces will make [the] cost of this adventurism unaffordable for it,” Jaitley told journalists in New Delhi. “Pakistan should stop this unprovoked firing and shelling if it wants peace on the border.”

U.N. chief Ban Ki-moon’s spokesman urged the two sides to engage in dialogue to find “a long-term solution for peace and stability in Kashmir.” The spokesman added: “He deplores the loss of lives and the displacement of civilians on both sides.”

The Pakistan Army on Thursday confirmed five more civilians had died on its side of the disputed northern Kashmir region and eastern Punjab province, doubling the toll to 10. Seven civilians have died on the Indian side.

The neighboring countries have traded blame for the cross-border strikes, which began during Eid-ul-Adha celebrations in the predominantly Muslim region.

Khawaja Asif, Pakistan’s defense minister, said his country was “fully capable of responding befittingly to Indian aggression” but urged India to exercise caution. “We do not want the situation on the borders of two nuclear neighbors to escalate into confrontation,” he added.

The latest crisis is being closely watched for signs that India’s new rightwing nationalist government will take a more hardline approach to Pakistan. India, which has an estimated 500,000 troops deployed in its part of the disputed region, called off peace talks last month after Pakistan consulted with Indian Kashmiri separatists.

On Thursday Jaitley justified the Indian shelling by saying his country had a “duty to defend its people,” and accusing Pakistan of trying to “precipitate tension where none exists.”

Shaukat Ali, deputy commissioner of Kotli on Pakistan’s side of the border, however accused Indian forces of starting firing whenever there was a religious festival. “They do it to create panic among the masses which ultimately creates problems [for] the government here,” he said.

Kotli resident Sakhi Muhammad said local people were being forced to live under constant threat to their lives. “Our women cannot go out to bring water from the wells because they [Indian forces] target them whenever they venture outside their homes,” he said.

Kashmir is divided between India and Pakistan but both lay claim to the scenic Himalayan region. Fighting between Indian forces and rebels seeking independence or a merger of the territory with Pakistan has killed tens of thousands, mostly civilians, since 1989. The two countries have gone to war over the territory twice, in 1947 and 1965, and fought a smaller scale conflict in 1999.

Violence has fallen in the region since 2004, when the countries began a peace process a year after signing a ceasefire agreement. While the agreement has largely held, minor clashes occur regularly along the disputed border known as Line of Control (LoC) as well as along the internationally recognized frontier dividing Indian-administered Kashmir from Pakistan’s Punjab province.

Indian security sources say this week’s shelling has occurred along the internationally recognized border as well as the LoC. India has long accused Pakistan of violating the ceasefire pact to try to push armed rebels in from across the de-facto border. Pakistan maintains that it does its best to prevent incursions into India-administered Kashmir.

Modi, a staunch nationalist, upped the rhetoric on Thursday in signs that the violence may not end soon. “Our soldiers have responded to the aggression with courage,” he said in televised comments while addressing a public rally in the western Indian state of Maharashtra. “The enemy has realized that times have changed and their old habits will not be tolerated,” he said, to loud cheers from the crowd.

Pakistan is losing international support and sympathy for any conflict where pakistan is a party as the fault will always rest with a habitual offender.No country spoke in support of pakistan as always the case.Even if some in pakistan may consider india guilty but their voices would be muted as there is always doubts in everybodies mind about pakistani intent.Instead of bleeding india through thousand cuts pakistan should focus on developing of the economy and better lifestyle for pakistani’s.Nobody in their common sense will accept that any region whatsoever their affliation is ready to join pakistan in their own free will as again pakistan is a culprit and suspect who cannot assure better quality of administration and economy for their people.Which country in their common sense like a basket case country to expand and take on new areas.So, time is running out for pakistan to clean up its territory of those vicious fear mongers and terror culprits and give a better life to its countrymen.