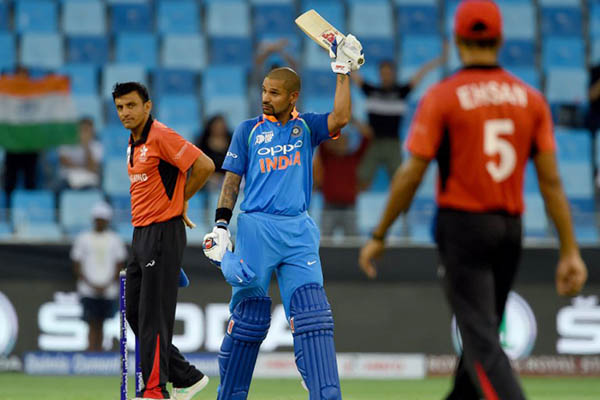 India survived a scare against Hong Kong after Shikhar Dhawan’s hundred as they battled to a 26-run win over the minnows in the Asia Cup on Tuesday.

Chasing a big 286-run target, Hong Kong gave their illustrious opponents a run for their money with an opening stand of 174 runs before collapsing to 259-8 in 50 overs.

India were lifted to 285-7 by a punishing 127 by Dhawan—his 14th one-day international hundred—and an attractive 60 by the recalled Ambati Rayudu at Dubai Stadium.

The Group A match was expected to be a one-sided affair, but Nizakat Khan scored a brilliant 115-ball 92 with 12 fours and a six, with skipper Anshuman Rath adding 73 to make India sweat for victory. Their stand is the best for any wicket by Hong Kong in an ODI, bettering the 170-run stand for the fourth wicket by the same pair against Scotland at Mongkok in 2016. But both fell in successive overs to give India a sigh of relief ahead of their high-profile match against Pakistan on Wednesday, also in Dubai.

Leg-spinner Yuzvendra Chahal (3-46) and debutant paceman Khalil Ahmed (3-48) were the pick of Indian bowlers. It could have been the second upset in successive days after five-time champions Sri Lanka were sent packing out of the tournament by Afghanistan with a 91-run win in Abu Dhabi.

Dhawan and the recalled Rayudu steered India to 285-7 in 50 overs after Hong Kong won the toss and opted to field first.

India, resting KL Rahul, Jasprit Bumrah and Hardik Pandya in anticipation of an easy game, were helped to the total by an innings-building 116-run stand between Dhawan and Rayudu after skipper Rohit Sharma failed to capitalize on an inexperienced bowling attack by falling on 23. But Dhawan ensured he used the game as good practice ahead of the “match of the tournament” against rivals Pakistan, as he punished the Hong Kong bowlers at will.

Dhawan hit 15 fours and two sixes during his 120-ball knock. But once Dhawan and Rayudu fell, India lost their way with Mahendra Singh Dhoni falling without scoring. It was left to Dinesh Karthik (33) and Kedar Jadhav (28 not out) to ensure India got beyond the 280-mark.

The total was much lower than India’s 374-4 in the only previous match between the two teams in Karachi in the 2008 Asia Cup.