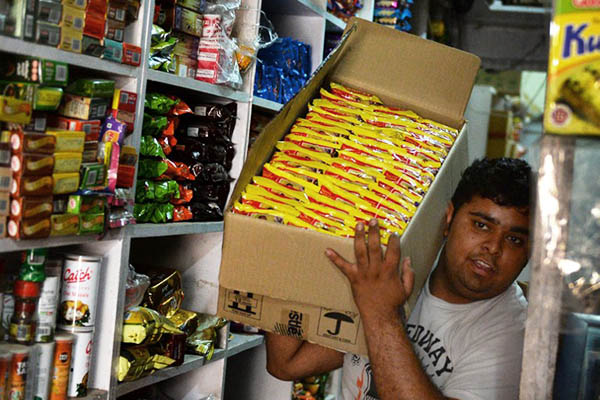 The company had already pulled its wares off shelves until it could establish that lead levels were within permissible limits.

The Food Safety and Standards Authority of India (FSSAI) said tests by some states had found too much lead in the product, and ordered Nestle to halt manufacturing. In a statement, it said it was ordering Nestle India to “withdraw and recall all the nine approved variants of its Maggi Instant Noodles from the market… and stop further production.”

Nestle, which says the lead content in its Maggi noodles is well below India’s legal limit, had already withdrawn the product from sale as it tries to contain the growing scandal. On Friday its global chief executive Paul Bulcke said the product was “safe for consumption.”

“We decided to take off the noodles from the shelves as there was confusion about the safety,” he said at a press conference in New Delhi. “The safety of our consumers is paramount. We are working with the authorities to clear up this confusion.”

At least six states including India’s capital have announced temporary bans on the sale of the instant noodles in the past few days, after officials said test results showed high lead levels. The FSSAI said the presence of lead “beyond permissible levels” could make the product “unsafe and hazardous,” citing risks of damage to the kidneys and the nervous system.

Activists in Kolkata on Thursday burned packets of the noodles in protest, underscoring the scale of public anger. Nestle has been selling its Maggi brand in India for three decades and has 80 percent of the country’s instant noodle market.

The product—marketed as a quick and healthy snack—grew increasingly popular as more and more Indians moved away from their homes to study or seek work. It emerged as one of India’s five most trusted brands in a consumer survey conducted last year.

Several celebrities have endorsed Maggi over the years, including Bollywood superstar Amitabh Bachchan.

The scare met with a mix of outrage and disappointment on Twitter, where it was one of India’s top trending topics on Friday. “A collusion of unscrupulous MNCs [multinational companies], ad agencies and food regulators leads to junk being sold as emotional nectar to Indians daily. #NestleIndia,” tweeted the bestselling novelist Chetan Bhagat.

Others complained that the instant noodles were the only thing they knew how to cook. “RIP (for now) #Maggi #NestleIndia hoping to be back in 2MINS,” tweeted one fan under the handle @FivePointReview, referring to the time it takes to cook the dish.

The Future Group, India’s biggest retailer, removed Maggi packet noodles from its more than 500 stores this week until results of tests being carried out nationwide are known.

The scare began when food inspectors in Uttar Pradesh said they had found high lead levels in two-dozen Maggi noodle packets during routine testing, along with the flavor enhancer MSG, which is not listed in the ingredients. The state last weekend filed a criminal complaint against Nestle India over the findings, while a separate legal petition was filed against Bollywood stars who have advertised the noodles.

Nestle has said it does not use MSG in its Maggi products sold in India, but that glutamate is a naturally occurring substance and may be present in some of the ingredients. The company, which markets a huge range of food items from Nescafe instant coffee to KitKat bars, said Maggi noodles would return to the market “as soon as the current situation is clarified.”