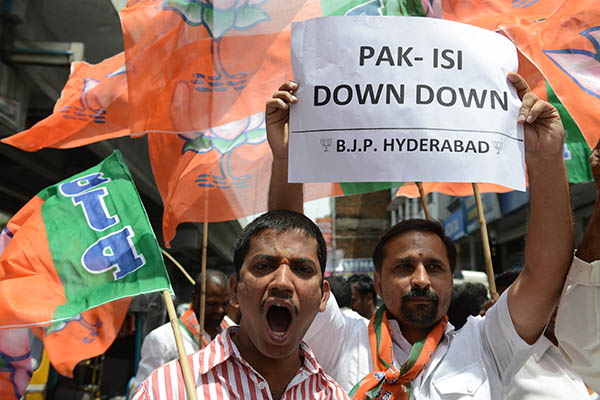 The Indian government on Thursday alleged that specialist troops from Pakistan’s army were involved in a deadly attack on its troops in Kashmir, in its first direct accusation of Pakistani military complicity.

Defense Minister A. K. Antony also hinted at stronger military action along the Line of Control (LoC) in the disputed Himalayan region where an ambush overnight on Monday saw five Indian soldiers killed.

“It is now clear that the specialist troops of Pakistan Army were involved in this attack,” Antony told parliament. “Nothing happens from Pakistan’s side of the LoC without the support, assistance, facilitation and often direct involvement of the Pakistan Army,” he said.

Antony’s strongly worded statement comes after the opposition angrily accused the minister of deliberately choosing not to blame the Pakistan Army for the attack, amid attempts to revive peace talks with Pakistan.

The picturesque Himalayan territory of Kashmir is divided between India and Pakistan by the U.N.-monitored LoC, the de facto border, but is claimed in full by both countries.

Analysts have said the attack has complicated efforts to arrange a meeting between India’s veteran Prime Minister Manmohan Singh and his new Pakistani counterpart Nawaz Sharif. “Naturally, this incident will have consequences on our behavior on the LoC and for our relationship with Pakistan,” Antony said.

“Our restraint should not be taken for granted nor the capacity of our armed forces and resolve of the government to afford the sanctity of the LoC ever be doubted,” he added.

While Indian military sources said Tuesday that Pakistani troops were behind the attack, Antony would only say in a statement the same day that it was carried out by men wearing Pakistani uniforms.

Pakistan has denied any part in the incident, but India has lodged an official protest with Islamabad for what is one of the worst losses of life for the Indian army since a 2003 truce agreement.

The opposition accused the government on Wednesday of letting Pakistan off the hook over the attack, amid mounting pressure to postpone peace talks between the two rival neighbors.

Antony made his statement after receiving the latest briefing over the attack from Army Chief Gen. Bikram Singh on Thursday.