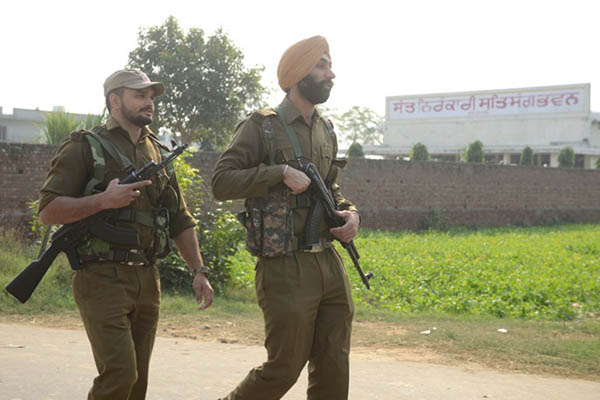 Indian police on Wednesday made an arrest over a grenade attack last week in northern Punjab state that killed three worshippers as it blamed rival Pakistan for what it called “an act of terrorism.”

Around 250 devotees of the Nirankari religious sect were praying in Amritsar last Sunday when a grenade was thrown into the congregation. The blast killed three people and injured 20 Nirankaris, whose beliefs are at odds with mainstream Sikhs who dominate in Punjab.

Punjab Chief Minister Amarinder Singh said one suspect had been arrested and police were searching for the other behind the attack he alleged was planned by Pakistan. “The grenade attack was an act of terrorism,” he said. “ISI [Pakistan’s Inter-Services Intelligence] is resorting to all these sort of things.”

A security alert has been sounded across Punjab ahead of Guru Nanak Prakash Diwas, a day to commemorate the birth of Sikhism’s founder. The occasion is marked widely across northern India by both Sikhs and Hindus.

Punjab, which was divided between India and Pakistan when they split after independence in 1947, has a history of sectarian and separatist violence.

Unlike most Sikhs, Nirankaris accept the authority of a living guru, and disapprove of the militant brotherhood of the Khalsa.

Some of these sectarian tensions peaked in the 1980s when Punjab was gripped by militancy. In 1984, the Indian military launched an assault on the Golden Temple in Amritsar aimed at flushing out militants inside who were demanding an independent Sikh homeland. Many in the Sikh community were enraged by what it felt was desecration of the revered shrine.

Later that year Prime Minister Indira Gandhi was shot dead by her Sikh bodyguards. The assassination triggered anti-Sikh riots in which some 3,000 people were killed, many on the streets of New Delhi.

This week an Indian court handed down a rare death sentence to one of the accused for murder, rioting and other charges.

Punjab has since been largely peaceful for the last three decades, with Indian authorities mostly blaming fringe groups—allegedly backed by Pakistan, and located in Canada and U.K.—of trying to create unrest in the state.