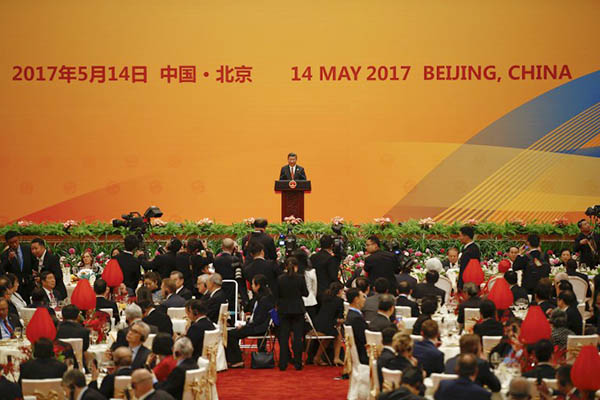 India signaled on Saturday it would boycott a summit in Beijing aimed at boosting China’s trade links to the rest of the world, setting off a new dispute between the neighbors.

The two-day summit, which began on Sunday, was attended by Russia’s President Vladimir Putin, Turkey’s President Recep Tayyip Erdogan and 26 other leaders. Without announcing a formal boycott, an Indian foreign ministry spokesman highlighted concerns about China’s so-called One Belt, One Road (OBOR) initiative, a massive undertaking to link the country with Africa, Asia and Europe through a network of ports, railways, roads and industrial zones.

The spokesman also reaffirmed India’s opposition to a Chinese-Pakistani economic corridor that runs through disputed Kashmir. “Guided by our principled position in the matter, we have been urging China to engage in a meaningful dialogue on its connectivity initiative,” said foreign ministry spokesman Gopal Baglay in a strongly worded statement released late Saturday. “We are awaiting a positive response from the Chinese side,” Baglay added. “Regarding the so-called ‘China-Pakistan Economic Corridor,’ which is being projected as the flagship project of the… OBOR, the international community is well aware of India’s position. No country can accept a project that ignores its core concerns on sovereignty and territorial integrity,” he said.

The China-Pakistan Economic Corridor passes through Gilgit and Baltistan in Pakistan-administered Kashmir, which is claimed by India. The two sides have been at loggerheads over Kashmir since their division in 1947.

India is also concerned because the 3,000-kilometer corridor ends in the strategic Pakistani port of Gwadar. India fears the port could become a Chinese naval base facing its navy in Mumbai.

India have had a series of niggles over the past year. China has opposed India’s entry into the Nuclear Suppliers Group (NSG), the club of countries sensitive nuclear technology, and U.N. action against a Pakistan-based militant leader, Masood Azhar. China in turn protested after India last month let Tibetan spiritual leader the Dalai Lama visit Arunachal Pradesh, which Beijing claims.

The foreign ministry spokesman said India had been “formally” invited to the Beijing summit. But he said India believes that “connectivity initiatives must be based on universally recognized international norms, good governance, rule of law, openness, transparency and equality.” There have to be “principles of financial responsibility to avoid projects that would create unsustainable debt burden for communities.”

India insists that “connectivity projects must be pursued in a manner that respects sovereignty and territorial integrity,” the spokesman said.

Chinese officials had earlier said they expected India to send an official delegation to the summit.