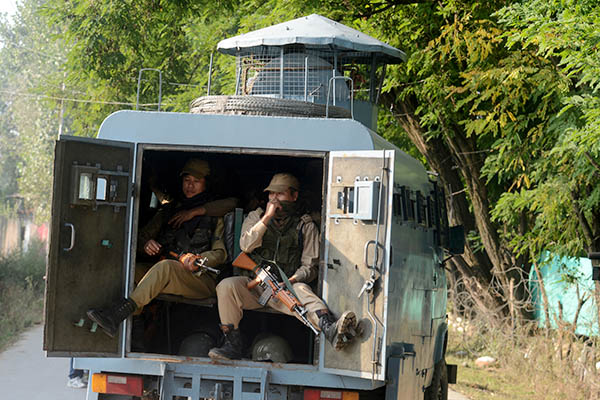 India announced on Tuesday it had fired mortars at Pakistan Army posts across their disputed border in Kashmir, a rare public disclosure of such a preemptive assault against its neighbor.

Troops fired at military camps in Pakistan-administered Kashmir, which were being used to harbor militants, an Indian army spokesman said. “As part of our counter-terror operations, punitive fire assaults across LoC [Line of Control, the de facto border] are being undertaken by the Indian army,” Major-General Ashok Narula told a briefing in New Delhi. “[A] recent action by our troops in Naushera sector has caused some damage to Pakistani army posts which are supporting infiltrations. This is part of our strategy to counter terrorism,” he said, adding India would “proactively” resist militant incursions.

The army released footage of smoldering bunkers in ruins after being hit by mortar bombs. The date and place of the bombing was not disclosed.

Pakistan denied the allegations. “Indian claims of destroying Pakistani post along LOC in Naushera Sec and firing by Pak Army on civilians across LOC are false,” Pakistan’s military spokesman tweeted.

Indian Defense Minister Arun Jaitley posted on Twitter that the army was taking “preemptive and measured actions” to counter terrorism.

The hostile neighbors regularly exchange mortar fire across the Kashmiri border despite signing a ceasefire in 2003. But it is very rare for India to disclose details of its strikes against Pakistan, or release videos as proof of such assaults. The muscular approach is likely to raise its neighbor’s hackles at a particularly tense time.

India accused Pakistani troops earlier this month of murdering and mutilating Indian soldiers at the border, and vowed revenge for the “despicable” act. Pakistan denied responsibility. New Delhi won a symbolic victory over Islamabad last week when the U.N.’s top court ordered Pakistan to stay the execution of an Indian national convicted of spying.

Tensions have been high since India launched cross-border strikes last September across the de facto border in Kashmir. The region has been divided between the two countries since the end of British colonial rule in 1947. Both claim the Himalayan territory in full and have fought two wars over it.