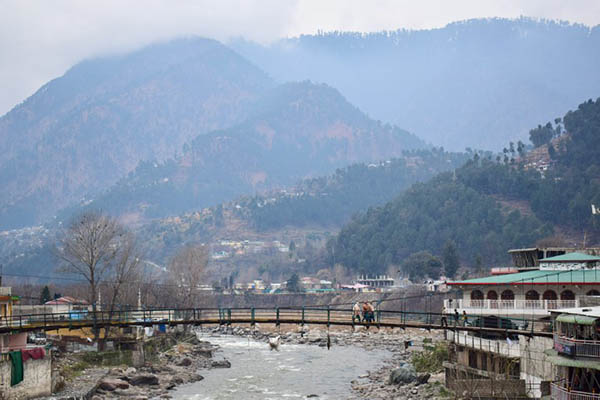 A view of Balakot, where India claims to have struck a Jaish-e-Mohammad camp. Jameel Ahmed—AFP

India said on Tuesday its warplanes launched a strike on a militant camp that killed a “very large” number of fighters preparing an attack, in a move that worsens tensions with rival Pakistan over disputed Kashmir.

Pakistan’s military earlier announced Indian jets had crossed into its airspace over the ceasefire line in the Himalayan region and dropped payloads, although it said there were no casualties.

The escalation comes in the wake of a suicide bombing that killed dozens of troops in India-Occupied Kashmir and sent tensions soaring. New Delhi had vowed retaliation after a Pakistan-based militant group claimed the attack.

“A very large number of Jaish-e-Mohammad terrorists, trainers, senior commanders and groups of jihadis who were being trained for fidayeen [suicide] action were eliminated,” he told a media briefing.

Pakistan’s military spokesman Major General Asif Ghafoor tweeted that the Indian Air Force had violated the Line of Control, the de facto border between India-Occupied and Pakistan-administered Kashmir. Pakistan Air Force jets were scrambled in response to the incursion, he said. “Facing timely and effective response from Pakistan Air Force [the Indian aircraft] released payload in haste while escaping near Balakot. No casualties or damage.”

The Indian foreign secretary also said the camp was located in Balakot.

There was confusion among analysts over the location as Balakot town is in Pakistan’s Khyber-Pakhtunkhwa province, some 40 kilometers northeast of Muzaffarabad, the capital of Pakistani-administered Kashmir. A strike that deep in Pakistani territory, and not in a disputed region like Kashmir, would be a major escalation, analysts said.

In a later tweet, however, the Pakistani spokesman said the incursion was “within AJ&K”—referring to the formal name of Pakistan-administered Kashmir—and just three to four miles over the LoC.

Ghafoor did not clarify what he meant by “payload,” which can refer either to bombs and missiles, or more generally to items carried which are not needed for the aircraft to fly.

The military spokesman also tweeted images of what he said was the payload dropped by Indian planes, showing what appeared to be pieces of metal and displaced soil in a heavily forested area.

Private Indian broadcaster CNN News 18 said: “Top government sources said that there were nearly 200 casualties from the [Indian Air Force] strike.” No casualties have been reported in Pakistan.

New Delhi had threatened to retaliate after the Feb. 14 attack, the deadliest in three decades in Kashmir, killed more than 40 Indian paramilitaries. Top Indian government officials said that Tuesday’s strike displayed the country’s determination to act against Pakistan—which New Delhi has long accused of using militants as proxies against it.

“They say they want India to bleed with a 1000 cuts. We say that each time you attack us, be certain we will get back at you, harder and stronger,” said foreign affairs minister of state, Vijay Kumar Singh, a former head of the Indian army.

Cabinet member Prakash Javadekar, the human resources minister, told journalists: “This is incredible. A necessary step for the country’s security.”

Islamabad has said it had nothing to do with the latest bombing in Kashmir, and has warned it will retaliate if attacked by India.

“If such actions continue, it can escalate into major conflict, which will not serve any purpose but to plunge the region into serious crisis,” he said.

Tensions are the highest since 2016, when Pakistan-based militants launched a pre-dawn assault on an Indian army camp in Kashmir that killed 19 soldiers. In response, India launched what it called “surgical strikes” on Pakistani territory. Pakistan denied the strikes ever took place.

Kashmir has been claimed by both India and Pakistan since independence in 1947. They have fought two of their three wars over the Himalayan territory. Pakistan’s interior ministry announced last week that authorities had seized control of a complex in Punjab believed to be the Jaish-e-Mohammad headquarters.